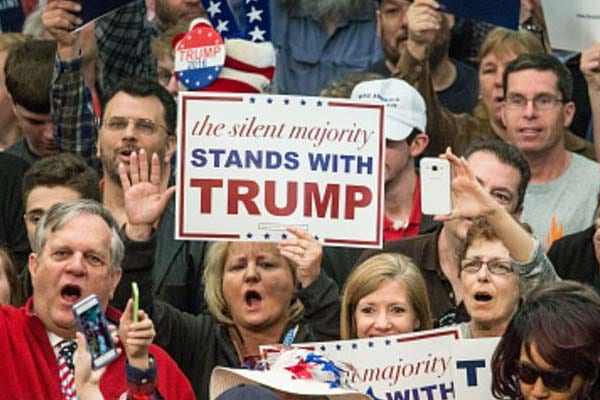 The propaganda media and the Democrats are trying to keep Republicans on defense with a campaign of smears, exaggerations, and outright lies.

From trying to impeach President Donald Trump (who is now a private citizen), to focusing on Rep. Marjorie Taylor Greene, to maximizing the divide between Rep. Liz Cheney and Trump supporters, the propaganda media and the Democrats are maneuvering to try to create a defensive Republican Party. They want to keep the GOP crouched in a circular firing squad shooting at itself.

This is because the Democrats have real imperatives driving them to harass and attack Republicans.

First, anti-Trump and anti-Republican rhetoric is the only thing unifying an otherwise shaky coalition on the Left. The longer they can keep making noise about Trump and Republicans, the more time they have to sign executive orders and change America through regulations without anyone noticing.

Second, the more they can focus the media on the Republicans, the less the media will cover the radical, corrupt, and job-killing actions and foreign policy blunders of the Biden Democratic Party.

Forget about the $600 million in cybertheft that Washington state Employment Security Department Commissioner Suzi LeVine presided over before being picked by President Biden for a leadership post in the Labor Department.

Forget the $11.4 billion to $31 billion in California unemployment insurance fraud in 2020.

Forget Gov. Andrew Cuomo mismanaging COVID-19 so badly that nine top public health officials have resigned. Cuomo’s failures are so big, and the unnecessary deaths are so great, even The New York Times is beginning to cover the Democratic governor’s disaster.

Forget Gov. Gavin Newsom mismanaging California so badly there is a petition drive underway to force a recall election. This is the disaster being ignored when Democrats say they want to “make America California again.”

Forget the radical House rules, which 207 Democrats voted for, to take mother, father, brother, sister, and other gender-specific words out of the House’s official rules document (imagine trying to explain that vote in most of America).

Forget President Biden’s executive order waiving Title IX for transgender males who want to compete as women – even if they have not undergone any biological changes. To the propaganda media, the collapse of competitive women’s sports is not a big enough issue to cover.

Finally, forget Frank Biden’s ad touting his close ties to his brother that was published by a Miami law firm on Inauguration Day. And forget the number of lawyers Hunter Biden has now hired to defend himself against a range of charges involving business dealings with China, Russia, and Ukraine – which the Left and the propaganda media insisted didn’t exist prior to the election.

The list could go on, but you get the picture.

The Democrats must stay on offense because they will be crushed once the American people see what they have actually been doing. The 2022 election could potentially become a nightmare for House and Senate Democrats. Remember: In 1994, House Democrats lost 54 seats and control for the first time in 40 years. In 2010, Democrats lost 63 seats and control. By every historic standard, the Democrats’ narrow five-vote majority should disappear in 2022 and Kevin McCarthy should become Speaker of the House.

Republicans have every reason to be optimistic.

Today, there are 27 Republican governors. In 23 states, Republicans control the legislature as well as the governorship.

Despite every effort of the Left to arouse (or manufacture) a civil war in the GOP, the party will remain largely unified and focused on creating more jobs, lowering taxes, increasing take home pay, defending America’s interests around the world – and developing solutions in health, learning, space, and other areas that matter to our future.

Ultimately, the Republican Party of entrepreneurship and hard work will defeat the Democratic Party of unemployment and redistribution.

Jobs and education will lead to continued Republican support in minority communities. The diverse House freshmen class (the most diverse GOP freshman class in history) and President Trump’s achievement in getting the most minority votes of any Republican presidential candidate in 60 years bode well for a continued growth for a party of prosperity and opportunity.

The Left is desperate to create a pro-Trump vs. anti-Trump civil war in the GOP. It will not happen. President Trump is by far the best known and most liked Republican. But the Republican Party is much bigger than any one person.

When you look at the achievements of Gov. Ron DeSantis in Florida and Gov. Greg Abbott in Texas, you can see a clear, successful future for the GOP.

Think of our future as a Trump-plus Republican party.

The former president will play a major role, but there will be a lot of smart, creative people adding their ideas and proving their capabilities. Our bench is immensely deeper than the Democrats’.

When you look at these long-term realities, it is clear Republicans should be optimists and let the Democrats have the monopoly on bitterness, hostility, and negativity.

When you see a Democrat, smile at them. It will drive them nuts. You are going to win, and they are once again going to sink into despair and defeatism.