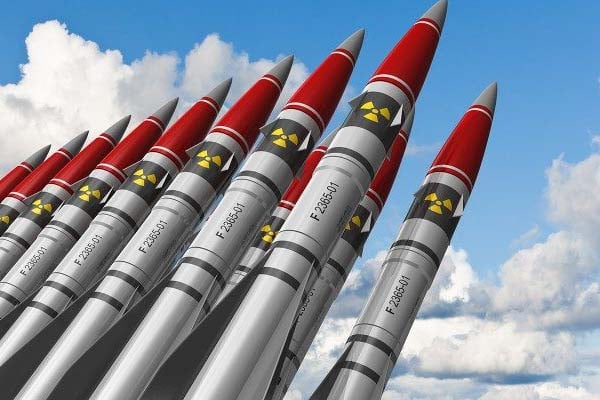 When I read Adm. Charles Richard’s warning that “nuclear employment is a very real possibility,” I sat up and began worrying as I have not worried since the end of the Cold War in 1991.

Adm. Richard leads the United States Strategic Command. He is the person charged with understanding what our potential enemies are doing – and developing capabilities to defeat them or deter them at minimum cost in American lives.

In an article this month in Proceedings, The US Naval Institute’s magazine – a serious and prestigious publication about national security – Adm. Richard warns that both China and Russia have “begun to aggressively challenge international norms” in “ways not seen since the height of the Cold War.”

The danger, according to Adm. Richard is that “a regional crisis with Russia or China could escalate rapidly to a conflict involving nuclear weapons, if they perceived a conventional loss would threaten the regime.”

In other words, if the US continues to invest in dominance in conventional warfighting, the Chinese and Russian governments may feel compelled to move to at least tactical – and possibly theater level – nuclear warfare to save their military from a humiliating defeat.

It is important to understand how shocking and how big a change this is in our national security thinking. The US has operated for decades on the belief that if we can maintain a strategic nuclear deterrence, the danger of nuclear war involving the US is small.

The rise of potential nuclear armed “outsider” states, such as North Korea and Iran, make the danger somewhat larger. But due to of the sheer weight of our nuclear force compared with anything they could develop in the foreseeable future; we have felt they could be contained from striking at the US because we would annihilate their regimes.

Now, we are being told by our top commander in the strategic warfare space that we must take seriously the idea that Russia and China might find themselves in circumstances where escalating to nuclear weapons would be more acceptable than being humiliated by the US.

For the last few weeks, we have watched the Chinese Communists deliberately penetrating Taiwanese air space and threatening Taiwan. For years, we have watched the continued Chinese build up in the South China Sea. For months, we have seen skirmishing between China and India in the Himalayas. China has now announced it is going to build a huge city on an island 120 miles north of Australia – clearly threatening that country’s national security.

China and Russia are rapidly modernizing their forces and developing capabilities which will directly threaten American military dominance.

“The nuclear capabilities of the US adversaries are sobering. The strategic capabilities of our competitors continue to grow, and they are sobering.  More than a decade ago, Russia began aggressively modernizing its nuclear forces … It is modernizing bombers, intercontinental ballistic missiles (ICBMs), submarine-launched ballistic missiles (SLBMs), nuclear-powered ballistic missile submarines, warning systems, command-and-control (C2) capabilities, and the doctrine to underpin their employment — in short, its entire strategic force structure. This modernization is about 70 percent complete and on track to be fully realized in a few years. In addition, Russia is building new and novel systems, such as hypersonic glide vehicles, nuclear-armed and nuclear-powered torpedoes and cruise missiles, and other capabilities.”

Adm. Richards warned that failure to rethink our understanding of the Russian and Chinese threat could lead to “embarrassment — or perhaps worse — at the hands of our adversaries.”

“Worse” than embarrassment would, of course, be defeat. Our senior strategic commander is warning us that nuclear defeat by China and Russia is possible in the foreseeable future.

For anyone who wants an introduction to how horrifying a nuclear war would be, I recommend Philip Wylie’s novel Tomorrow!  Written in 1954, it is a horrifying and sadly accurate depiction of the impact of a nuclear weapon on an American city. I read it as a child, and it terrified me so much that I have worried about nuclear war ever since.

Congress should be holding hearings on Adm. Richard’s remarkable report on the dangers we face.

The Biden Administration should make preventing and surviving a nuclear war a high priority and insist that the departments of defense and homeland security produce a reality-based program for minimizing American casualties if a nuclear event does occur.

Compared to the nonsense Washington is currently obsessed with, this report by Adm. Richard is historic, urgent, and could become a matter of life and death.