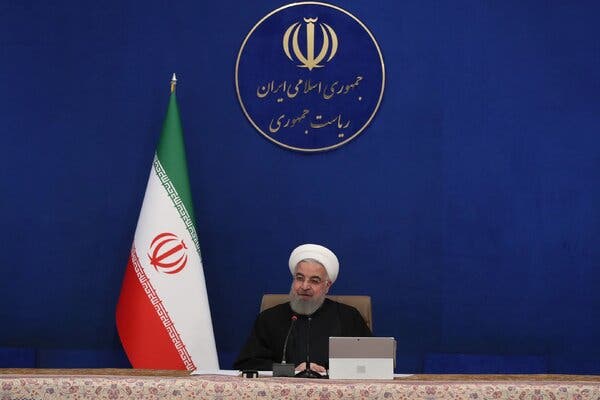 Years from now, if Iran has nuclear weapons, historians will wonder with bewilderment how we didn’t see it coming — and, more importantly, why we didn’t act to stop it.

The IAEA took samples from two sites during inspections in the fall and found traces of radioactive material, which, based on where it was found, could indicate Iran has undertaken work on nuclear weapons. It later found evidence of the uranium metal creation after Iran moved some equipment to a facility under IAEA supervision.

Last year, Iran blocked the IAEA’s inspectors from checking the sites involved for months. Which begs the obvious question: If there’s nothing to hide, why block inspections?

This latest news fits with a consistent pattern of Iranian cheating and deception.

For decades, the regime has stonewalled inspectors, refusing to grant them access.

If Tehran doesn’t stonewall, then it just destroys evidence. A recent report by the IAEA, for example, discusses an Iranian location that was razed in 2003 and 2004. The site experienced such “extensive sanitization and leveling” as to render a visit of “no verification value.”

And, of course, when it comes to nuclear issues, Iran’s leaders are pathological liars.

In 2015, the IAEA found traces of manmade uranium at Parchin, the vast Iranian military base, south of Tehran. The US concluded the traces were likely tied to weapons work conducted in the past. Iran told the IAEA, however, that they were linked to its conventional, non-nuclear weapons.

Yukiya Amano, then the director-general of the IAEA, disagreed.

“The samples did not support [the] Iranian story,” he said in 2016. “The Iranians weren’t telling us everything in this regard.”

Beyond the one inspection at Parchin, Iran has steadfastly refused to allow inspectors to access its military sites — the same sites where the regime would most likely weaponize fissile material.

Iran claims its nuclear program is peaceful, but it’s clear the program exists to build weapons, not to conduct medical research or for some other peaceful use. If the regime’s intentions were truly benign, it wouldn’t covertly build nuclear sites deep in a mountain. Nor would it endure economic sanctions and military threats to continue enriching uranium and building ballistic missiles.

In fact, Tehran could have created a massive nuclear infrastructure in the open, with the world’s help, if it was forthright and its program was peaceful. Instead, we have the current situation.

Most tellingly, in 2018, Israel snatched some 100,000 files containing detailed plans to build nuclear bombs that Iran had hidden away in a secret warehouse in Tehran. Think about it like this: Why would a bank robber who promised to quit still have blueprints of banks stashed away in his basement?

President Joe Biden must hold the regime accountable for its nuclear deceptions. But returning to the 2015 nuclear deal with Iran isn’t the answer.

The deal allows Iran to continue deceiving the world while continuing its nuclear work. Even proponents of the agreement acknowledge that, under its terms, Iran has up to 24 days to grant access to inspectors to inspect undeclared but suspected nuclear sites. That’s ample time for the regime to hide or destroy evidence.

Even worse, the deal provides Iran numerous opportunities to further delay access to inspectors by several weeks or even months.

The Biden administration would be foolish to re–enter such a flawed agreement. Washington should instead maintain and expand the former Trump administration’s massive economic pressure on Iran, work with the Israelis to sabotage Iran’s nuclear program, and make the potential use of military force a credible threat in the event that Iran gets dangerously close to obtaining nuclear weapons.

If Iran sees that even a Democratic administration is willing to pursue such coercive policies, then the regime will have no choice but to negotiate.

Indeed, the problem with former President Donald Trump’s policy toward Iran was that it was doomed to fail in just one term. True, the policy devastated the regime and gave the US leverage to renegotiate a better deal in the future. But it needed four more years to work. Iran was always going to try to wait out the Trump administration, enduring the pain while hoping for a less resolute president to win the 2020 election and come to its rescue.

That’s precisely the strategy employed by Iran, and the regime thinks it worked. But Biden has the opportunity to crush the regime’s hopes by continuing his predecessor’s coercive policies and not rejoining the nuclear deal.

If Biden relents, however, then Iran will have further incentive to ramp up its nuclear program, knowing it can bully Biden into caving to Tehran’s demands.

Iran is clearly trying to scare the Biden administration into blinking first and rejoining the nuclear deal. We’ve heard new threats and heated rhetoric, in addition to Iran’s numerous violations of the agreement.

How Biden responds over the next four years will determine whether historians look back on us with bewilderment. Let’s hope he and his advisers all learned from the mistakes of their former boss.