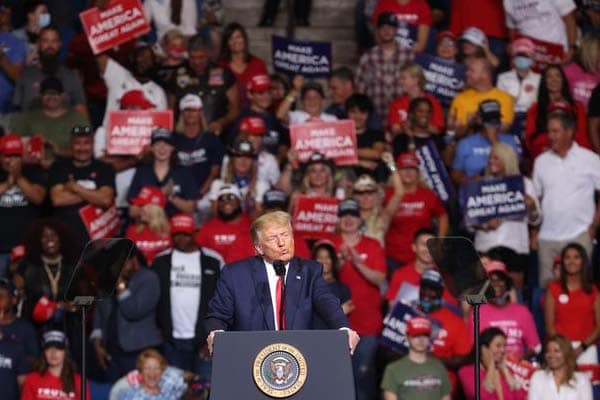 At this point, the key to Trump’s following is President Joe Biden.

No matter how bad Trump’s lawyers are (and yesterday’s opening presentation for Trump may be the most incompetent, amateurish, and ill prepared opening I have ever seen), Biden is worse.

No matter what the accusations against former President Trump are, his base can’t leave him because the alternative is so unacceptable to them.

This hostility to the Washington establishment was driven home to me recently when Scott Rasmussen reported on a survey in which 72 percent of the American people said “political elites believe they are superior to everyday Americans.” Rasmussen found only 11 percent disagreed and 17 percent were not certain.

This idea that the elites hold themselves above the rest of us was shared by 78 percent of men and 68 percent of women who were asked in a survey of 1,200 registered voters from Feb. 4-6. This idea also seemed to bridge the urban-rural divide. Seventy-seven percent of suburban voters, 70 percent of urban voters, and 60 percent of rural voters all agreed.

There was a larger gap between the private and public sector workforces, with 82 percent of those in private business agreeing that the elites believed themselves superior and only 63 percent of government workers concurring.

Every time Biden signs another left-wing executive order (supporting tax-funded abortion, effectively eliminating Title IX protection for women’s sports, killing tens of thousands of jobs in pursuit of a radical climate agenda) Trump supporters are reminded they have no alternative.

Every time the left-wing Democrats do something crazy like abolish the words mother, father, brother, sister (and two dozen other gender-specific words) from the House Rules, people are reminded that there is no alternative.

When Democratic governors in New York, New Jersey, Michigan, Illinois, California, and elsewhere destroy freedom of religion and establish authoritarian societal rules (which they themselves promptly break) Americans are reminded that the government elites do believe they are above common citizens and the law.

As the Chinese Communists build momentum around the world – and as pro-Chinese Communists are appointed to key government positions by the Biden administration – people are reminded that there is no alternative.

Biden’s strongest ally, the teachers’ unions, have proven to be Communist China’s greatest allies. A year of non-teaching has put most American students further behind their Chinese counterparts. Years of terrible bureaucracy and incompetence have destroyed opportunity for hundreds of thousands of inner city school children. It has limited their earning capacity, their learning skills, and their ability to break out from poverty and crime-ridden neighborhoods. The emphasis on weird left-wing values and “woke” education further weakens America and tears apart the common culture which has historically made America so successful. There is a breathtaking arrogance of the teachers’ unions in refusing to reopen even after the US Centers for Disease Control and Prevention says it is healthier and better for students to be in school.

Faced with this simple choice between students and the union – between learning and hiding – President Biden has consistently sided with the teachers’ unions against science, public health, parents, and students.

As the Montgomery County, Maryland school system explained its hypocrisy in an email to parents:

“As we prepare for our return to an in-person learning experience, we anticipate a need for adults to support the supervision of students.  If you know any adults with a high school diploma/GED who would be interested in monitoring students at $15.72 per hour, please encourage them to apply to be considered for the position of classroom monitor. Duties include monitoring classrooms of teachers who are providing virtual instruction to students in the building and supporting in-person teachers.”

Note that the teachers refuse to go back to work in the schools, but it seems safe enough for common, untrained parents to monitor the students in-person.

Once again, Trump supporters – and any Americans who think this is all crazy – are left with no choice.

What Washington elites don’t understand is that Trumpism is much bigger than former President Trump.

Trumpism is a broad and growing repudiation of oligarchical billionaires, giant companies censoring our lives, international companies selling out American values to make a buck in a Communist Chinese dictatorship. Trumpism is a rejection of radical social values being imposed on our children as early as 5 or 6 years of age. It is recognition that American bureaucracy so incompetent a Nigerian cyber criminal gang stole $600 million from Washington State – and the incompetent official that presided over the fraud, Suzi Levine, has now been nominated by Biden for a major job at the Department of Labor overseeing $9 billion a year. (This is cronyism at its worst. She and her husband gave the Biden campaign and Democrat organizations $400,000.)

Nothing the left can say will shake the tens of millions of Americans’ belief that the elites despise them, the bureaucrats bully and cheat them, and the news media lies to them.

He can thank President Biden for making it easier.