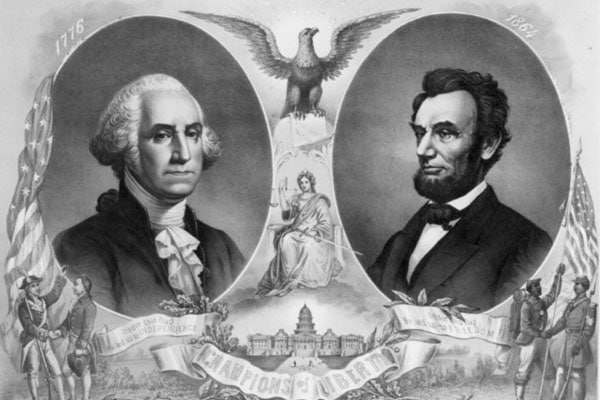 This Presidents’ Day it is more important than ever to remember our nation’s history and reflect upon the amazing achievements of our greatest presidents. This holiday is also an opportunity to recall our remarkable experiment in self-government, defined by the principles enshrined in the Declaration of Independence and the Constitution.

Virtually every one of our Founding Fathers was in awe of Washington and recognized a moral force in him which transcended intellect or physical courage. There was a reason Washington commanded the Army for eight years, presided over the Constitutional Convention, and served two terms as the first President of the United States.

It was these remarkable achievements which led us to produce The First American, a documentary film about the life and legacy of President Washington.

Washington’s true greatness was his behavior immediately following victory in the Revolutionary War. At least one of his officers, disgusted with congressional incompetence and unreliability (they had that problem back then, too) urged him to take over the country and govern as a king. Washington replied:

“[I]f you have any regard for your country, concern for yourself or posterity or respect for me… banish these thoughts from your mind, and never [again] communicate… a sentiment of the like nature.”

The fear of repeating Oliver Cromwell’s dictatorship at the end of the English Civil War (1653-1658) was of real concern to Americans throughout the Revolutionary War. Lesser men and women would have been tempted by the prospect of absolute power.

Yet Washington rose to the occasion as a true believer in the rule of law, the principles of Republican government, and commitment to freedom. On December 23, 1783 Washington appeared before the Continental Congress in Annapolis, resigned his commission as commander-in-chief of the Continental Army, and returned to Mount Vernon a citizen.

Struck by Washington’s humility and willingness to give up power, American painter Benjamin West reported that King George III told him Washington’s resignation, “place[d] him in a light, the most distinguished of any man living, and that [King George] thought him the greatest character of the age.”

King George was right. Washington was the greatest man of his age.

The Founders, led by Washington, passed on to future generations a truly exceptional nation, one that prioritizes human freedom and equality under the law.

Perhaps no one carried these ideals more faithfully than President Abraham Lincoln, whose birthday is also celebrated on Presidents’ Day.

As President Lincoln said, the American experiment is “not for one people or one time, but for all people for all time.”

Lincoln understood that the Declaration and the Constitution were immortal documents. He was not alone.

“When the architects of our republic wrote the magnificent words of the Constitution and the Declaration of Independence, they were signing a promissory note to which every American was to fall heir,” King said. “This note was a promise that all men, yes, black men as well as white men, would be guaranteed the unalienable rights to life, liberty, and the pursuit of happiness.”

People on both sides of the political aisle often talk about the importance of national unity. Nothing will better unite the American people than a shared love of country, bound by our founding principles and values.

On this Presidents’ Day let us celebrate our nation’s presidential heroes and embrace our American history.