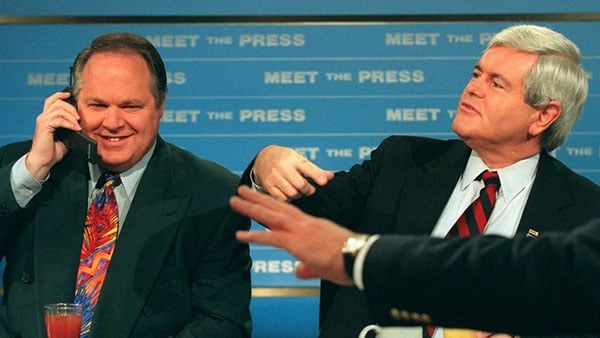 Rush Limbaugh’s passing is a tragic moment. Callista and my sympathies go out to his family and loved ones. He was a wonderful man and one of the great heroic figures of the conservative movement.

I knew Rush as a political commentator, a pioneer, and as a personal friend. I have so many memories of Rush, but first let me talk about him as a national figure. Beginning in 1988, Rush Limbaugh created a nationwide audience of more than 20 million people who felt that they had to listen to him every single day. They believed he was the personification of intelligent, funny, confident conservatism that was willing to take apart liberals who were doing indefensible things, challenge the political elites, and stand up to political censorship.

His audience was powerful. I can tell you this from personal experience. When we ran the 1994 Contract with America, Republicans had been out of power in the house for 40 years. Rush’s help was absolutely vital to winning that election, communicating the issues to the country, rallying people, and helping key candidates win.

I used to go down and visit with Rush once he had left New York and gone down to Palm Beach. He moved partly because he was fed up with being surrounded by New York liberals. In Palm Beach, he found a lot of conservative friends. Two of them, Gay and Stanley Gaines, are now among our closest friends. We would often get together at Gay and Stanley’s. Bill Bennett would come down, and Rush would join us for a long weekend. My children and their spouses would come down. On one occasion my son-in-law Paul Lubbers hit a hole in one, while golfing with a Rush and Stanley. He has a card to this day testifying to that hole in one signed by Rush Limbaugh, so it’s a genuine collector’s item.

Rush was very considerate and very open. Callista and I had lunch with him one time, and it turned out they had both started in radio working the late shift in high school at small town radio stations. In Callista’s case, she ultimately went on to do other things and ended up as the US Ambassador to the Holy See in Rome. But in Rush’s case, he kept coming back to radio again and again – and became amazingly successful. It was fun to sit there and listen to these two people who started at the same point. Rush became a national figure in his own right in radio. Callista has become a national figure in a totally different way. And the conversation was just between two friends. Rush never had any sense of presenting himself as an important national figure or heroic pioneer. There was nothing pompous or stuffy about him. He was just practical, and down to earth. So, I think that it’s really important to remember Rush Limbaugh the person.

Rush never really left Missouri in his heart. He had that middle American, down to earth sensibility. He might have lived in Palm Beach, but his mind and senses of reality and life were still basically in Cape Girardeau. He brought this with him to Kansas City, where his career really began to take off – then on to Sacramento. He never lost that touch – that life is about common, every day, practical things. And he never lost the courage to stand up to the Left and the elites – no matter how outraged they became. The result was he had an amazingly faithful, solid group of listeners.

And one last thing I just have to say: Rush worked really hard at learning the trade. He practiced the art of radio in a variety of ways. He worked really hard learning how to be successful. It used to infuriate him when friends of his will say, “Oh, I could do that. All you have to do is get on and talk.” Rush prepared every day, and he brought to bear a lifetime of experience. It was a terrific thing when President Trump honored him at the State of the Union. It was an emotional moment to see him there. It was emotional to see a normal guy from Missouri earn such an honor purely through a lifetime of hard work.