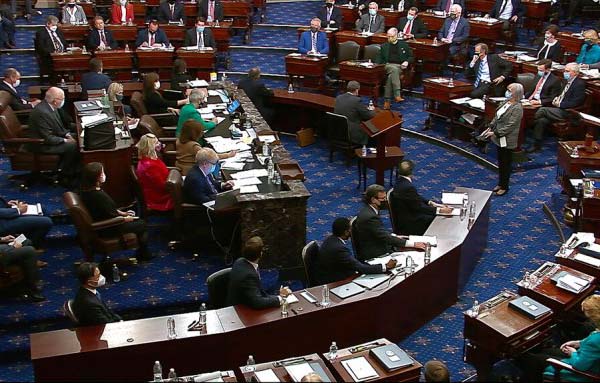 Last week, we asked readers to decide what strategy would be most effective for Republicans to take during Donald Trump’s second impeachment trial. Now that the trial has concluded, we have the results of your opinions and how they matched up with what really happened.

A total of 738 readers contributed their thoughts on this historic event. The most selected option was for Republicans to “Play the long game,” with 55.96 percent (413 readers). This strategy would involve calling “many witnesses so Trump’s story can get through the media and out to the American people.”

Most other voters felt the opposite, however, and felt Republicans should “Keep it short,” with 36.59 percent of the vote (270 readers). The advantage of this route would be to minimize the Democrats’ public spectacle, removing them from the spotlight. Finally, 7.45 percent (55 readers) reported they were “not sure” which strategy the GOP should carry out.

Newt mentioned these two strategic possibilities with Sean Hannity earlier this month prior to the trial. After a five-day process, Donald Trump was acquitted due to the two-thirds majority not being met to impeach him over the Capitol riots in January. It appears that the Trump defense team’s strategy aligned most closely with “keeping it short” with successful results. It remains to be seen what Trump’s next moves will be after his acquittal and how Americans will perceive him.