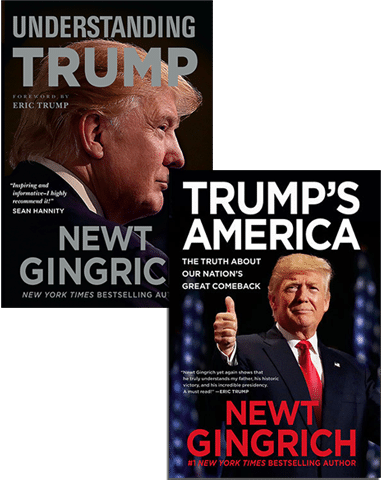 Miller was with Trump from the early days of the 2015 campaign and throughout the entirety of Trump’s administration. He worked with the former president on a daily basis developing policy, messages, and strategies to help make Americans lives better.

I was delighted this week to sit down with Miller for my Newt’s World podcast – for his first long-form interview since he left the White House – to talk about how he got to where he is and where he plans to go from here.

Although I met Miller years ago when he was a staffer for the US Senate Budget Committee, I learned a great deal in our hour-long chat that I didn’t know before.

Based on where he grew up, it’s surprising that Miller turned out to be a serious conservative. He was raised in traditional Democrat household in Santa Monica, California. As he put it, his parents were not radical leftists. They were traditional Democrats in the Franklin Delano Roosevelt tradition. This worldview was all he ever knew growing up.

However, he encountered the Republican platform for the first time during a sixth-grade class assignment in which he was instructed to write a speech based on the platform he was assigned. As he told me, looking at the GOP platform “this all just makes sense.”

He became truly active in politics – and solidly conservative – following the Sept. 11, 2001 terrorist attacks. In the months following the attacks, he said most people around him in his Santa Monica area high school and community reflexively took the position of “blame America first.”

He was so deeply offended and concerned by the notion that somehow it was America’s fault that a group of radical, violent Islamist terrorists killed nearly 3,000 Americans that it opened his eyes to the indoctrination that was happening in his classes. In history, for example, he told me, “history was taught from the perspective that America was wrong – and always wrong and … uniquely evil, uniquely pernicious, never ever morally right, never ever justified in any decision that we ever made.”

Keep in mind: Miller is now 35. This was decades ago. In our conversation, Miller was describing the seeds that were planted which have led to Oregon’s public school system teaching that getting the “right answer” in mathematics was an expression of white supremacy, or the idea that we should rename buildings and tear down statues of some of our Founding Fathers because they didn’t end slavery in the late 1700s.

This early realization in the Santa Monica school system was what spurred Miller to start writing and organizing around conservative, pro-American principles once he became a student at Duke University, then a press secretary for Rep. Michele Bachmann, and ultimately a senior advisor to the President of the United States.

In addition to discussing Miller’s career path, we also discussed the key issues that keep him focused on America’s future.

He is seriously concerned – as many of us are – about the destructive repercussions of identity politics, the censorship of dissenting opinion, and the rewriting of American history.  As Miller explained, it is central to the radical Left’s foundation to destroy Americans’ faith in ourselves, our past, and our present. Because this destruction is the prerequisite for changing America into a dramatically different country, which is less free, less safe, and less successful.

Importantly, Miller shared his concern that the American Left has perfected a sort of American self-loathing and it is currently exporting this self-loathing to our allies abroad.

I hope you will listen to this week’s episode and learn things about Miller and the Trump administration that the liberal media simply won’t tell you.

I’m excited to see where Miller’s career takes him next. As he said, the movement that President Trump started in 2016 has much more to do and contribute to help build a country that is more unified, safer, and more prosperous.

Miller will be there every step of the way.  [vc_separator][vc_column_text]