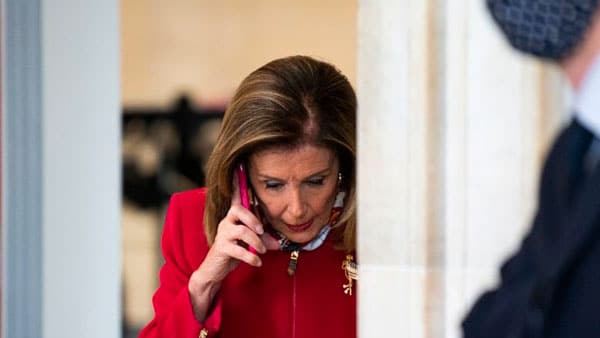 Most critiques of the current $1.9 trillion Joe Biden-Nancy Pelosi-Chuck Schumer legislative rip off have missed the purpose of the bill.

This isn’t surprising. The Democrats have mastered the art of using morally positive language to describe the indefensible. In a real sense, they have captured the warning in George Orwell’s Politics and the English Language. Orwell observed that the more destructive, dishonest, and indefensible a policy is, the more likely it is to be described in language which obscures and hides its purpose.

If you understand the true purpose of this bill – to funnel your tax dollars to Democrat-allied states and institutions – you will marvel at the intelligence the chutzpah of the Democratic leaders. They have played an adroit linguistic shell game with the American people (which their media allies are cheerfully assisting).

The words “COVID-19 relief” are propaganda to justify an unjustifiable bill. Think of “COVID-19 Relief” as the engine pulling a huge train of expensive goodies for Democratic allies. It is language used to hide hundreds of billions in pure pork payoff.

A famous scene from the film Jerry McGuire is illustrative of the current situation. Cuba Gooding Jr. (as a football star) trains Tom Cruise (his sports agent) to chant “show me the money.” This scene provides a much better understanding of the Democrats’ desperation to pass this massive spending bill. What they really want is to answer their allies’ calls of “show me the money.”

The Democrats are the party of big government, big bureaucracies, big public employee unions, and radical left–wing activists. This $1.9 trillion bill is designed to appease and feed virtually every element of this coalition. The Democrats are artfully using the American people’s money to grow their machine and strengthen their coalition.

Teachers’ unions are rewarded for a year of horrible behavior – in which they have ignored the advice from the Centers for Disease Control and Prevention to sacrifice the futures of young Americans on the altar of narcissistic self–indulgence. They like collecting a paycheck for not going to work. The Biden-Pelosi-Schumer team is so indebted to them that paying them off with tens of billions in taxpayer dollars is an imperative. In the Democrat-run world, the unions’ political power makes educational failure irrelevant.

Similarly, the Democrats must protect badly run states with terrible pandemic shutdown policies. They must overlook the destruction of small businesses and higher unemployment in these states. They must use your money to cover pension plans ruined by state-level Democrats who bought current votes by promising future benefits they cannot finance. And national Democrats must support bureaucracies so incompetent that $63 billion to $200 billion in fraudulent unemployment insurance cases have been paid throughout the pandemic ($32 billion in California alone).

As pure political combat, this is a brilliant strategy: Punish Republican-run states (which have lower unemployment, more balanced budgets, and prudent pensions) and take transfer their money to the unbelievably destructive, oppressive, and incompetent Democrat-run states.

When you combine the impact of this transfer of resources with an anti-energy policy, which will hit Republican states much harder than Democratic states, you have a formula for strengthening the Democrats while undermining the Republicans – with just a few bills.

This use of taxpayer money to strengthen the Democratic machine explains the resumption of earmarks for specific projects. A legislative body is much easier to manage if you can reward and punish individual members.

It would be interesting in this context to learn who put the $100 million grant for an underground train in Silicon Valley into the bill. Clearly, the extraordinarily rich internet capital of the world could build its own transit system. The major companies – Google, Facebook, Apple, Twitter, etc. – have more than enough cash in their reserves that they could build the railway if they wanted to. However, some politician wanted to be able to claim credit for “delivering” money from Washington. Again, this is a case of “show me the money.”

I anticipate the Biden administration will consistently follow the “show me the money” model.

Expect a lot more hidden pork – and a lot more hypocritical moralizing – as the Democrats desperately seek to use your tax money to prop up and grow their political influence.