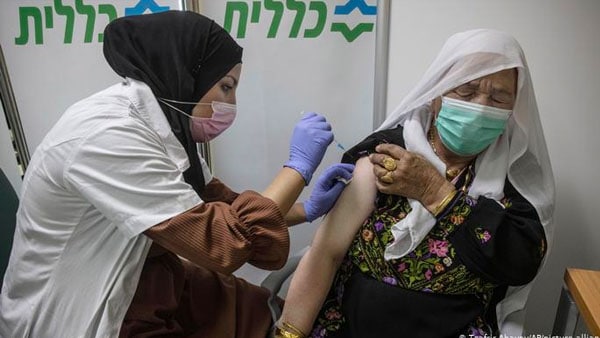 The folks at the New York Times damn well knew what they were doing.

On Tuesday, the Times reported that Israel was sending thousands of spare coronavirus vaccines to “far-off allies” while ignoring the Palestinians.

Curiously, the reporter who wrote the story, Patrick Kingsley, and his editors failed to note that the Palestinian Authority was among those set to receive vaccines. (The plan to send a symbolic number of doses abroad has since been put on hold following domestic disputes inside Israel.)

There’s no reasonable explanation for these omissions. They had to be intentional.

But why leave out those details? Well, let’s just say it serves one well at the Times to make Israel look bad.

Of course, the Times is hardly the first Western media outlet to promote the lie that Israel is denying vaccines to the Palestinians. Headlines such as “Palestinians excluded from Israeli COVID vaccine rollout as jabs go to settlers” have been commonplace. Even publications not slandering Israel so explicitly are portraying the Jewish state as a cruel bully keeping vaccines away from the Palestinians.

Sen. Bernie Sanders (I-VT), for example, tweeted Wednesday that, as the “occupying power, Israel is responsible for the health of all the people under its control.” He continued: “It is outrageous that [Israeli Prime Minister Benjamin] Netanyahu would use spare vaccines to reward his foreign allies while so many Palestinians in the occupied territories are still waiting.”

Their falsehoods and misleading statements have even entered the popular culture.

Just last week on NBC’s Saturday Night Live, chief writer and comedian Michael Che said that Israel had already vaccinated half its population before adding with a smirk: “And I’m going to guess it’s the Jewish half.”

These voices — in media, politics, and entertainment — are either ignorant or intentionally misleading the public.

Here’s the truth: Arabs comprise about one-fifth of Israel’s population, and they’re getting the vaccine just like Jewish citizens. Even Arabs who live in Jerusalem but have opted not to become Israeli citizens are being vaccinated.

As for those Arabs who live in the Palestinian territories — Gaza and the West Bank — they have rejected Israel’s help multiple times.

Just last week, Israel reportedly sent a request asking that the Israeli government be allowed to open a station to vaccinate mainly Palestinian worshippers visiting the Temple Mount, which is holy to both Jews and Muslims.

Palestinian Authority President Mahmoud Abbas opposed the idea, according to one report, because he didn’t want to give Israeli officials a presence in the holy area.

But even after Abbas said no, the report added, Israel made a second offer: that Arab Israeli paramedics, not Jewish ones, administer the vaccines. Israel even offered that they be dressed in clothes that bear no markings of Israeli medical establishments.

The Palestinians turned them down.

What’s Israel supposed to do?

The answer should be nothing, because it’s the Palestinians’ responsibility to manage their own health care, not Israel’s.

The Oslo Accords, to which both Israel and the Palestinians agreed, state explicitly that “powers and responsibilities in the sphere of health in the West Bank and the Gaza Strip will be transferred to the Palestinian side.” The agreement also details how Palestinians are responsible for forming, implementing, and managing their own vaccination programs.

Despite what the New York Times and Bernie Sanders say, Israel has no desire to “occupy” the Palestinians territories and doesn’t actually administer the lives of those who live there. Which is why Palestinians in effect already have their own state — the Palestinian Authority governs the West Bank, and Hamas, a terrorist organization, governs Gaza. Both are simply bad at governing.

Curiously, these same voices are silent about Palestinians in Lebanon and elsewhere outside of Gaza and the West Bank needing coronavirus vaccines. They’re also silent about the 130-plus countries that still don’t have a single vaccine.

Why? Perhaps for the same reason that Israel is the only country in the world whose existence is OK to question: Too many people, especially elites in the media and politics, are strangely obsessed with Israel. They hate the Jewish state with an illogical passion — a passion that reeks of antisemitism.

This isn’t just about vaccinations. We are witnessing a revival of the ancient blood libel, according to which Jews murder Christian children and use their blood for religious rituals. This insane conspiracy theory was used throughout the Middle Ages to justify the slaughter and persecution of Jews.

Just as antisemitism has mutated with time to conform to what is socially and culturally acceptable, so too has the blood libel. Today, it has transformed to accusing Israel of wantonly harming and murdering Palestinians.

Saying that Israel is only vaccinating Jews or denying Palestinians any vaccines amounts to a modern version of this ancient hatred. The point is to perpetuate a lie which portrays Israel as the ultimate evil — much like past efforts to portray Jews as the ultimate evil.

Of course, such lies inevitably incite violence against Jews (or the Jewish state).

That the likes of Che, Sanders, and mainstream journalists are spreading this poison shows how normalized antisemitism has become. Combatting this trend will be one of the great challenges of our time.