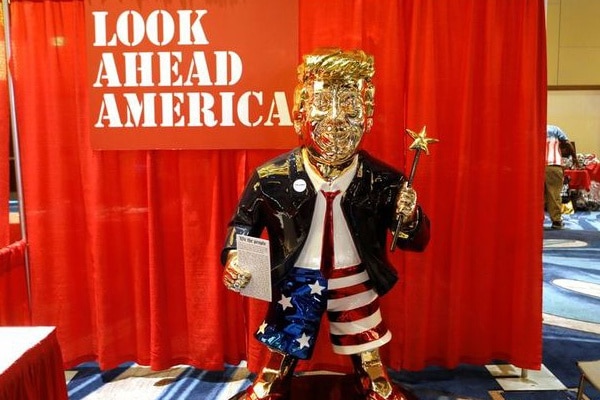 One unexpected guest, however, was a gold-colored statue of Trump. The statue, donning flip-flips, shorts, and its own Constitution, became a centerpiece of the convention as attendees flocked to have their picture taken alongside it.

According to Fox News, the fiberglass statue was created by artist Tommy Zegan, who plans to sell it for $100,000. He hopes that a real, metal version will find its way to the Trump Presidential Library.

However, not everyone was so fond of the statue. One photo of the statue was edited to show evangelical Christians praying to the statue, which drew immediate criticism from eager critics of the former president. While it isn’t clear whether the image was widely known to be fake, some liberals seemed to be tricked by the falsification.

Fox News reports that Joel Stein, former LA Times journalist asked if “the fall of Rome was this embarrassing” and later deleted the image after admitting it was “photoshopped”.

Former Democratic congressional candidate Adam Christensen jumped in too, tweeting the photo with the caption “Praying to a Golden Idol.” He later offered justification for sharing the fake photo. “White Evangelical support is near an all time high going into CPAC and after the event rolling this idol into the conference it’s clear that their ‘support’ is close to going to the next level,“ Christenson tweeted. “It is a visual representation.”

Prominent liberals consistently caricature conservatives for their beliefs. Unsurprisingly, when their narrative lacks evidence, they’ll just create some. So where is big tech with their censorship of fake news? Nowhere. After all, they see it as a “representation” of their reality. Conservatives must continue to fight for truth wherever they on, whether on Twitter or in Congress.

Read more about this story at Fox News. [vc_separator][vc_column_text]