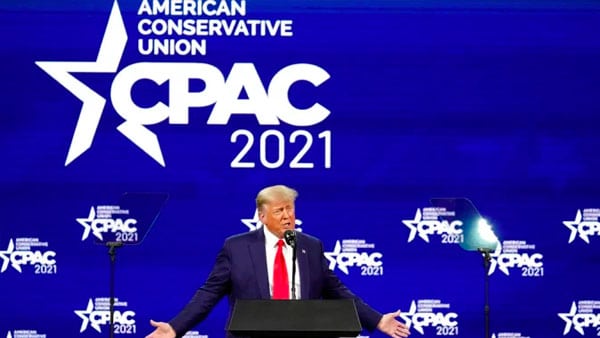 Matt Schlapp’s decision to move the Conservative Political Action Conference from Washington, D.C. to Orlando, Fla. was brilliant. No one knew how good this decision would ultimately be for the conservative movement.

Washington is the heart of the swamp. Its news media is toxic and focused only on propaganda. The lobbying firms, bureaucracies, and the social life are all dominated by Democrats.

In recent years, hatred of Trump and fear of COVID-19 have made Washington a dark and dour place for conservatives.

By contrast, Florida is winning. Under former Gov. Rick Scott and current Gov. Ron DeSantis, Florida has a competent but limited government – and a much lower tax burden than states such as New York (where the bureaucratic public employee unions keep spending about twice the Florida level per capita).

The result is a friendly and positive response to newcomers and a level of happiness reinforced each sunny day.

The Washington media is breathlessly obsessed with a particular fantasy. As Chris Cillizza wrote in 101, there is a “civil war at the heart of the Republican Party.”

However, at CPAC, it was obvious that there was no civil war. The tiny number of potential Republican rebels simply were not invited, and their absence was mostly irrelevant.

The CPAC straw poll indicated that 95 percent of the participants favored the Republican Party continuing with President Trump’s ideas. Only 3 percent opposed the Trump ideas and 2 percent were undecided.

In a 31 to 1 split, it impossible to imagine – and disingenuous to suggest – a civil war underway or even likely.

Nevertheless, there is no question that the GOP’s heart belongs to Trump. He gave a solid speech, and the crowd loved him. He was clearly the first big winner at CPAC. His announcement that he would not move to a third party was important – and a major step toward big Republican victories in 2022.

For 2022, President Trump should focus on replacing Speaker Nancy Pelosi with Speaker Kevin McCarthy. If a local district party wants to back an insurgent against an unreliable or hostile Republican incumbent that is their prerogative. It is a waste of resources and a destructive signal to the party for a national leader to spend time beating his own party when there are so many Democrats who are much worse for our agenda and values.

If President Trump was the biggest winner at CPAC, Gov. DeSantis must be the second big winner. The fact that he would get 21 percent even with President Trump in the primary is a real tribute to DeSantis’s leadership. The reality that without Trump in the primary Gov. DeSantis would receive 43 percent of the vote is amazing. He is clearly the non-Trump frontrunner and destined to be a major star in 2022 and 2024.

The other big winner was a small surprise. I have known and admired Gov. Kristi Noem since she was a member of the US House. She is a charismatic, energetic, and intelligent advocate of common-sense conservatism. She has also been an effective governor and her record makes laughingstocks of Govs. Andrew Cuomo, Gavin Newsom, and the other leftist leaders.

However, until CPAC, Gov. Noem was relatively unknown. Her speech in Orlando launched her as a national player, and the CPAC participants reinforced this when they placed her second in the non-Trump primary with 11 percent of the vote. That put her above Donald Trump Jr., Secretary of State Mike Pompeo, and Sen. Ted Cruz. She is clearly becoming a major national figure.

For the conservative movement, this was an incredibly strong CPAC. It proved there is a deep Republican bench with a lot of talent – and a positive, optimistic vision for a better America.