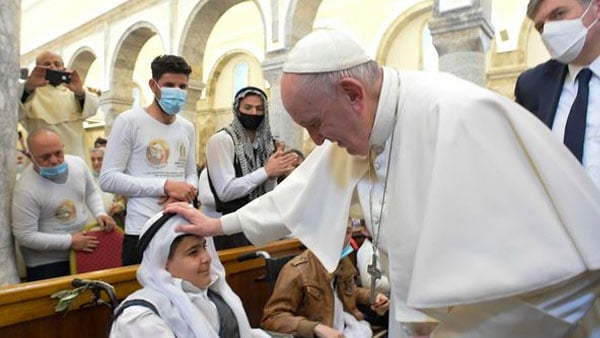 From March 5-8, Pope Francis embarked upon an historic visit to Iraq, perhaps the most significant trip of his pontificate.  The importance of this first-ever papal visit to Iraq, a country ravaged by war and violence, can hardly be overstated.

Iraq is home to one of the oldest Christian communities in the world.  Following years of conflict, however, Iraq’s Christian community has fallen from approximately 1.5 million prior to 2003 to 300,000 today.  Since the Iraq War began in 2003, Christians have suffered under persecution, violence, and destruction.  These horrors were made worse by ISIS militants, resulting in many Christians fleeing to escape the brutality.

It is nothing short of miraculous that Pope Francis was able to embark upon his visit to Iraq.  Saint John Paul II wanted to travel to Iraq but was unable to do so because of ongoing violence that threatened the country. Pope Emeritus Benedict XVI also did not travel to Iraq citing many problems in the region.

Pope Francis’s papal visit was nearly postponed, due to an increase in COVID-19 cases and heightened violence in Iraq in recent weeks.  However, the Holy Father was resolute in his mission to bring the message of faith, forgiveness, fraternity, and peace to Christians and others in Iraq.  Speaking to journalists aboard the plane after takeoff, he said, “It is a duty toward a land that has been tormented for so many years.”

On Friday, the Holy Father arrived in Baghdad where he met with both Prime Minister Mustafa al-Kadhimi and President Barham Salih.  In a speech at the Presidential palace, Pope Francis emphasized the equality of all people saying, “It is essential to ensure the participation of all political, social and religious groups and to guarantee the fundamental rights of all citizens.”

He then went to the Syro-Catholic Cathedral of Our Lady of Salvation where he met with bishops, priests, seminarians and catechists.  This was an emotional visit, as 58 people were murdered in this church by terrorists during Mass in 2010.

On Saturday, Pope Francis held important meetings that emphasized interreligious dialogue and fraternity.  In Najaf, the Holy Father met privately with Grand Ayatollah Ali al-Sistani, Iraq’s most powerful Shiite cleric.  This meeting was an enormous breakthrough in facilitating interfaith dialogue between the Catholic and Muslim worlds.  Al-Sistani released a statement following the meeting saying Christians deserve to “live like all Iraqis in security and peace and with full constitutional rights.”  Pope Francis then travelled to Ur – the birthplace of Christianity, Judaism, and Islam – where he held an interreligious meeting with representatives of the three Abrahamic religions.

These impactful dialogues will be remembered in Iraq and around the world for years to come.  Following these historic meetings,  Prime Minister al-Kadhimi announced that March 6 will be commemorated as a “National Day of Tolerance and Coexistence.”

On Saturday evening, Pope Francis returned to Baghdad to celebrate Mass at the Chaldean Cathedral of Saint Joseph.  Here he offered words of encouragement during his homily to Iraqi Christians saying, “God wants to work wonders precisely through our weaknesses.”

On Sunday, Pope Francis travelled to sites that were decimated by the Islamic State.  He visited Erbil, in the autonomous region of Iraqi Kurdistan, where he met with the region’s President, Nechirvan Barzani, and Prime Minister Masrour Barzani.  Erbil has sheltered an estimated 540,000 refugees who fled to escape violence in Mosul, Qaraqosh, and Syria.

Pope Francis then travelled to Mosul, the former capital of the Islamic State, where he prayed for the victims of war at Hosh al-Bieaa Church Square.  In a demonstration of the destruction that accompanies religious extremism, Pope Francis prayed in the square amidst the rubble of four churches of the ancient Christian community.

After departing Mosul, the Holy Father journeyed to Qaraqosh and visited Christians at the now-restored Church of the Immaculate Conception.  ISIS had formerly burned the church and used it as a training base.  While speaking at the church, now a symbol of restoration and renewal, Pope Francis said, “Dear friends, this is the time to restore not just buildings but also the bonds of community that unite communities and families, the young and the old together.”

Upon Pope Francis’s return to Erbil on Sunday evening, he celebrated Mass with more than 10,000 people in the Franso Hariri Stadium.  In Pope Francis’s homily, he conveyed a message of renewal and courage to Iraqi Christians:

“The Lord promises us that, by the power of the resurrection, he can raise us, and our communities, from the ruins left by injustice, division and hatred.  The Church in Iraq, by God’s grace, is already doing much to proclaim this wonderful wisdom of the cross by spreading Christ’s mercy and forgiveness, particularly towards those in greatest need.  Today, I can see at first hand that the Church in Iraq is alive, that Christ is alive and at work in this, his holy and faithful people.”

Despite the tragedy, violence, and loss that have been experienced by Christians and other persecuted communities throughout the Middle East, Pope Francis, a pilgrim of peace, brought hope, healing, and encouragement to the people of Iraq.