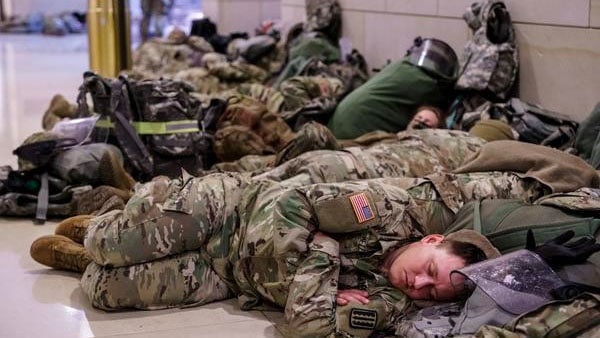 After the Jan. 6 storming of the US Capitol, the National Guard became a staple security measure at the center of our nation’s democracy. Before long, however, the brave men and women who have sworn to protect America and the US Capitol were being disrespected and taken advantage of by the same people who mandated their presence.

Two weeks after rushing to the Congress’s aide, guardmembers were ordered to vacate the US Capitol facilities unless on duty. In other words, if the guard members were on break getting some much-needed sleep, they had to find somewhere else to do it, with no notice. The guardsmen were offered no other place to go than the parking garages in the area, which had one bathroom for 5,000 troops.

Politicians from both sides of the aisle decried the situation, and the situation was quickly rectified. After that horrendous disrespect, you would think that Washington officials would take special care of the guardsmen. Instead, soon after, reports came out that guardsmen at the US Capitol have been severely underfed. When there was an adequate amount of food for the service men and women, it consisted of undercooked meat that sent dozens of soldiers to the hospital.

The saying goes “three strikes and you’re out.” We have to quickly reevaluate our actions before we reach strike three and lose the trust of our service men and women. Unfortunately, the White House and Speaker Nancy Pelosi are well on their way to reaching “strike three” by keeping them at the US Capitol long past necessary.

A month after the Capitol riot, the National Guard’s service was extended to March 12, because of an absurd QAnon theory that Donald Trump would be made president on March 4.The day came and went with no riots or violence (and no secret inauguration). Now, the National Guard’s presence at the US Capitol Building has been extended again until May 23. Who knows if this date will be extended once again?

President Franklin D. Roosevelt once said, “the only thing we have to fear is fear itself.” It seems the White House and members of Congress are letting fear of unrest rule their actions, even if there is no solid basis for this fear.

Not only is governmental fear-mongering harmful to our National Guard, but by proclaiming that half the US population, namely Republicans, are a danger to the Capitol, is harmful to an already-divided America.

Republicans had to listen to Democratic politicians and the media call BLM riots “peaceful” all last year. Now, we are considered public enemy No. 1 in our nation’s capital.

Members of the National Guard are being forced to stay at the Capitol and protect our lawmakers from imagined threats. If government wants to force them to stay, it is only right that they start adhering to two rules: Treat the National Guard with the utmost respect, and crack down with police force the next time a BLM riot happens. Otherwise, the White House and Congress need to send the National Guard home.