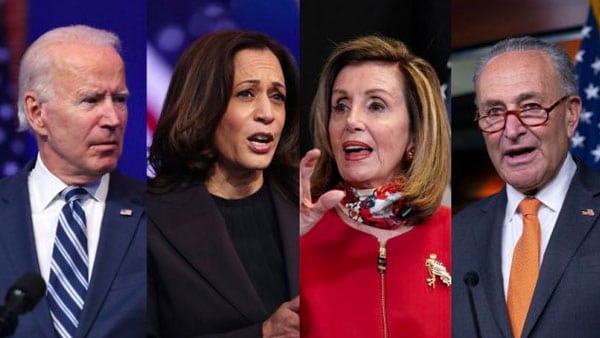 In vote after vote, we are watching Democrats, many of whom represent politically mixed, diverse districts and states, falling in line to vote for whatever Speaker Nancy Pelosi and Senate Majority Leader Chuck Schumer tell them to – with no regard for what the people they represent back home want. No Democratic Senator or House member seems to care or question what is in these bills. They are simply doing what they are told.

Soon, the US Senate will vote on H.R. 1. As I have been saying for weeks, it should be called the “For the Corrupt Politicians Act.” Among other things, this bill will nationalize federal elections, overriding state election laws across the country. This includes circumventing some state voter ID laws that are intended to protect the integrity of elections. It will also prohibit requiring identification, notarization, or witnesses for absentee ballots in every state.

The bill also moves to politicize the Federal Election Commission – the bipartisan entity that regulates federal campaign funding. Currently, the commission has six members – three Republicans and three Democrats. In the spirit of the Democrats’ “For the Corrupt Politicians Act,” the legislation would change the membership to five, so that whichever party was currently in power could control the body charged with enforcing election law. How is this in the spirit of making elections fair and just?

If all this isn’t enough, H.R. 1 will also create a tax-funded revenue stream for federal campaigns, which effectively means that conservative taxpayers in Florida will be paying for the re-election campaigns of radical Democrats in California – and Democrat taxpayers will be footing the bill for Republicans in red states.

These measures are just crazy – and deeply unpopular with Americans.

Increasingly, we are going to see Democratic members of the House and the Senate put in the position of having to decide whether to vote for the people they represent or the Harris-Biden-Pelosi-Schumer Democratic Machine.

Just consider the decisions Democratic Sens. Mark Kelly and Kyrsten Sinema of Arizona will have to make when H.R. 1 comes to the Senate for a vote.

Even more Arizonans (70 percent) reject the idea that the federal government should override Arizona’s voter ID laws. While H.R. 1 does not universally abolish voter ID laws, it opens the door to doing so. According to the survey, 69 percent of Arizona’s believe voters should show photo ID to cast ballots – either in-person or by mail.

As to the restructuring of the FEC, 77 percent of Arizonans oppose the effort to make it a partisan body. The same percentage of Arizonans reject the idea of a “New York City-style” campaign finance system that funnels taxpayer dollars to political candidates.

If these numbers don’t move Kelly and Sinema to break away from the Democratic Machine on H.R. 1, however, McLaughlin’s survey revealed a few more key results:

Arizona is just one example. McLaughlin has also done surveys for West Virginia, Montana, and the whole country on H.R. 1, which I will discuss in a following column.

The American system was designed to resist and break political machines like the one Kamala Harris, Biden, Pelosi, and Schumer are building. This system will be tested when H.R. 1 comes to the Senate.

Democrats across the country are going to have to decide whether they will vote with their people or with the Democratic Machine.

JOIN TODAY to be a part of this special event and receive a BONUS GIFT.Click here to join Newt’s Inner Circle.