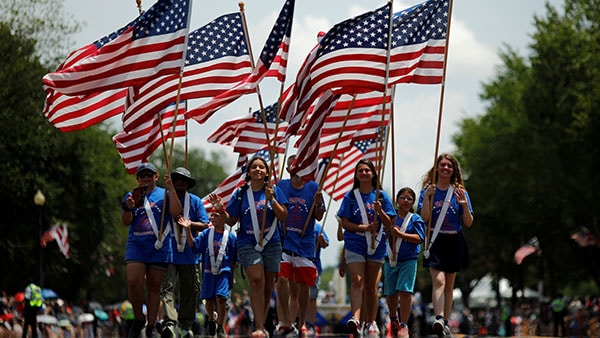 If you get paid to give your opinion, then you have an obligation to be honest. So, let me tell you what I believe about the state of America today.

As Americans, we’re currently in a fight for our freedom, for what we believe in as a country. And make no mistake: The stakes couldn’t be higher.

Consider the authoritarian overreach we’ve seen in response to the coronavirus pandemic at the local, state, and even federal levels. Across the country, Democratic leaders have used the COVID-19 crisis to exercise unprecedented control over our lives. Ask yourself: Do you feel truly free?

Just look at President Joe Biden’s first primetime address earlier this month. If we’re good little boys and girls, Biden told us, then we might be able to gather with our families on Independence Day — a day when we celebrate the rejection of tyranny.

Mr. President, you don’t get to make those decisions for us. This is America. The government can’t tell us when — let alone if — we can see our family, go to church, or go to work. We are independent, and we are free.

Imagine having a restaurant into which you’ve put your entire life, your entire financial wellbeing. You’ve invested your blood, sweat, and tears into this restaurant to build something. You’re providing jobs for other people. And then the government says you can’t open your own restaurant. That’s disgusting. That’s not America.

And yet, here we are.

The fight for freedom is real. Look at the attacks on the First Amendment as well. The left controls all our society’s most powerful institutions right now — big government, big tech, education, the press, corporate America.

And with all that power, the left also controls the flow of information to the American people. They set the terms for the rest of us about what’s acceptable to believe, say, and read.

And what if you don’t submit to their progressive agenda? You get canceled. You lose your podcast, you lose your book, you get fired, you’re shamed. And the victim isn’t always someone on the right. The editor of Teen Vogue just lost her job for tweets she wrote as a teenager.

All this madness puts us, as Americans, in this terrifying place where it’s imperative to be truthful and fight for what we believe — because we might not have the opportunity moving forward.

Which is why I’m launching my first podcast, The Truth with Lisa Boothe, in partnership with Gingrich 360 and iHeart Media. My mission is simple: to stand tall for the truth and cut through the noise to get to the heart of what actually matters.

I want to be a voice for anyone who rejects conformity and groupthink, anyone who’s tired of the people in charge telling them what to think, and anyone who feels like they’ve been lied to for too long by those in power.

Our country is in trouble, and we need more people to speak up.

No one has spoken up more for the American people in recent years than President Donald Trump, who was kind enough to be my guest on the first episode of The Truth with Lisa Boothethis past week.

President Trump did not disappoint, giving his most in-depth interview since leaving the White House. Hearing him describe the thought process behind his immigration policies was especially compelling as the nation endures a crisis at the southern border today, courtesy of Joe Biden’s flawed ideas.

President Trump also had a powerful message for conservatives at a time when our most sacred institutions are under attack from the radical Left: Keep fighting.

I discuss all this and more, including my background and plans for the podcast, on this week’s episode of Speaker Newt Gingrich’s podcast, Newt’s World. I am grateful to Speaker Gingrich for investing in me and giving me an amazing platform.

And I am so excited to use my platform in a constructive way by really digging into the issues, going beyond the usual political talking points. But more importantly, I look forward to being a voice for the American people, whose freedoms and beloved way of life are under threat.

This is a fight that is far beyond politics. It’s a fight for freedom, and there is no time to waste.