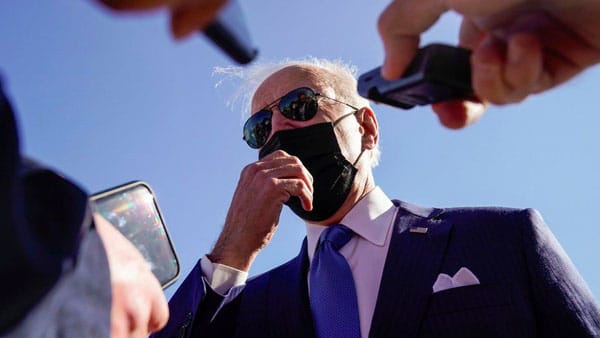 The only thing more infuriating than Major League Baseball’s unprecedented decision to punish Georgians over their state’s recent election law has been the national media’s dedication to lying about what the law says and does.

Since the bill was signed by Gov. Brian Kemp on March 25, we have heard from media how the bill would supposedly outlaw providing food and water to people standing in line to vote. As Democratic Strategist James Carville told 11th Hour host Brian Williams (with no pushback), “It is going to be illegal to give somebody that’s standing in line to vote. I have never heard of water being an illegal substance in the United States.”

This particular lie has been spread by the President of the United States himself (again with no scrutiny from media). On March 26, President Biden told media before boarding Marine One:

“It’s an atrocity.  The idea — if you want any indication that it has nothing to do with fairness, nothing to do with decency — they passed a law saying you can’t provide water for people standing in line while they’re waiting to vote.  You don’t need anything else to know that this is nothing but punitive design to keep people from voting.  You can’t provide water for people about to vote?  Give me a break.”

First, the part of the law in question primarily prohibits third parties from electioneering or attempting to persuade voters within 150 feet of a polling building, within said building, or within 25 feet of anyone standing in line. This was already on the books – and is common practice in many states. California, Illinois, and New York all prohibit electioneering within 100 feet of a polling place, for example. The new law in Georgia added a prohibition against giving waiting voters anything of value, including food or water within that area. Now, the law does nothing to keep third parties from supplying food or water to people outside the proscribed area. Importantly, what the media seems to be universally ignoring – or lying about – is the law expressly allows poll workers to provide water to people in line. The argument that this provision hinders anyone from voting is pure propaganda.

The Washington Post has also claimed Georgia’s voting law is “one of the most controversial because critics say it is likely to disproportionately affect Black voters.” The basis for this claim is the law’s requirement that absentee voters must provide proof of identification. The old law only required that signatures from ballot envelopes be subjectively verified. The media propagandists claim it is harder for Black voters to get IDs, and therefore it will be harder for them to vote absentee.

Now, 75 percent of Americans support identification requirements for voting, according to a recent Rasmussen Reports poll. Other surveys from McLaughlin & Associates have found more than 80 percent of voters favor voter ID laws.

Wide approval of voter ID laws aside, the Georgia law simply will not keep Black voters from voting. Any assertion otherwise is a blatant lie. If a voter does not have a driver’s license, he or she can provide the number to a state-issued voting identification card (which are free in Georgia). Still, if the voter doesn’t have that, he or she can provide the last four digits of his or her Social Security Number.

These are only two of the ways the left-wing media and Democrats are lying about Georgia’s new election law. I go into further detail on Wednesday’s episode of my Newt’s World podcast.

The truth is: Georgia’s new election law has expanded opportunities to vote in that state. The law standardized the use of secure voting drop boxes (they were only allowed in emergencies under prior law). It expanded early voting (both in days and hours) – including mandatory weekend voting for people who work weekday hours (contrary to the lies President Biden has been repeating).

Simply put: Georgia’s new election law has made it easier to vote – but harder to cheat. That fact explains why Democrats hate it so much.