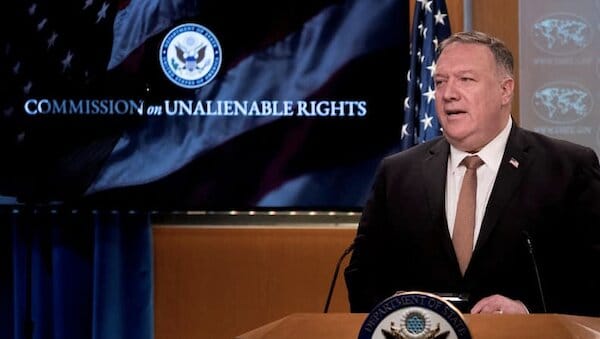 On March 30,  U.S. Secretary of State Tony Blinken unveiled the annual State Department report on human rights abuses.  While doing so, he formally announced the disbanding of the Commission on Unalienable Rights. This was unfortunate as the Commission had become an important tool for advancing and defending human rights through U.S. foreign policy.

Established by former U.S. Secretary of State Mike Pompeo in July 2019, and chaired by former U.S. Ambassador to the Holy See and Harvard Law School professor Mary Ann Glendon, the Commission was created as an advisory group for the Secretary.  The Commission’s Charter stated that its task was “not to discover new principles, but to furnish advice to the Secretary for the promotion of individual liberty, human equality, and democracy through U.S. foreign policy.”  The Charter also specified the Commission’s advice must be “grounded in our nation’s founding principles and the 1948 Universal Declaration of Human Rights.”

However, the Commission was recently disbanded amidst liberal criticism for being a mechanism to “promote evangelical Christian beliefs and conservative politics,” and for establishing a “hierarchy” of rights.

But these criticisms misunderstand the purpose and importance of the Commission on Unalienable Rights.

Essential universal rights are under siege by regimes around the world.  For example, the United States has issued a declaration of genocide against the Chinese Communist Party for the forced labor, arbitrary imprisonment, ideological indoctrination, and population control that targets Uyghurs and other Muslim ethnic minorities in Xinjiang.  In Iran, the Shia Islamic regime has suppressed free speech, denied its citizens due process, and carried out arbitrary killings and forced disappearances.  In Nigeria, attacks by Boko Haram and the Islamic State are responsible for the internal displacement of more than 2 million people.  And, in Venezuela, a United Nations investigation reported that citizens are subject to extrajudicial executions, arbitrary detentions, and torture carried out at the highest levels of government.

Amidst these ongoing crises, Secretary Pompeo recognized that U.S. and international commitment to champion human rights had veered from its original mission.  Following the end of the Cold War, human rights advocates created new categories of rights that removed the important differentiation between rights granted by governments and unalienable rights from God.  Consequently, according to Pompeo in a July 7, 2019 op-ed for The Wall Street Journal, “Human-rights advocacy has lost its bearings and become more of an industry than a moral compass.”

The Commission was tasked by Secretary Pompeo to address important questions such as: “What are our fundamental freedoms?  Why do we have them?  And who or what grants these rights?”

To answer these questions, the Commission closely reviewed America’s founding documents and the Universal Declaration of Human Rights.  Further, Secretary Pompeo enlisted the Commission – comprised of legal experts, scholars, and activists – to recenter the human rights discussion on the fundamental principles of individual liberty, democracy, and human equality.

According to the Commission’s 2020 report, “The power of the universal human rights idea is strongest when grounded in principles so widely accepted as to be beyond legitimate debate.  The tendency to fight political battles with the vocabulary of human rights risks stifling the kind of robust discussion on which a vibrant democracy depends.”

As new challenges to human rights emerge and oppressive regimes around the world continue to threaten the freedom and rights of their citizens, it is essential that nations courageously respond.  The United States has long been the leading supporter and defender of universal human rights.  It is critical that U.S. foreign policy continues to protect the unalienable, God-given rights of all human beings in cooperation with our partners and allies.

If the Biden Administration and Secretary of State Blinken are truly committed to the protection of individual freedom and liberty, they should re–establish the Commission on Unalienable Rights.