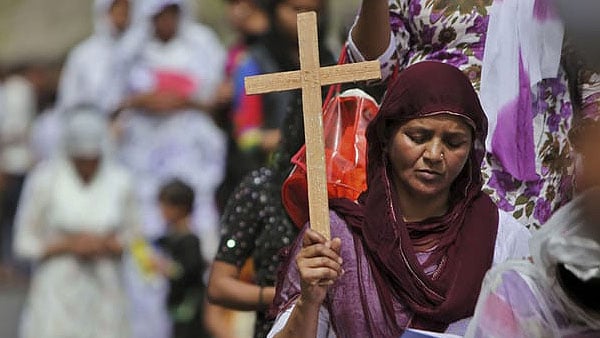 Three state governments in India have recently passed new “freedom of religion” laws, also known as anti-conversion laws.  The new laws are an attempt to suppress the alleged “love jihad” – an attempt by Muslim men to marry Hindu women with the intention of converting their wives to Islam.

Historically, India’s anti-conversion laws differ slightly by state, but as the U.S. Library of Congress noted, “All of the laws seek to prevent any person from converting or attempting to convert, either directly or otherwise, another person through ‘forcible’ or ‘fraudulent’ means, or by ‘allurement’ or ‘inducement.’”

While these laws are crafted to ensure “religious freedom,” in practice, they do the exact opposite.  Critics of India’s anti-conversion laws have concluded that these laws actually provide legal cover for violence against religious minorities, instill fear in religious believers, and discriminate against the non-Hindu Indian population.

The 2018 Limitations on Minorities’ Religious Freedom in South Asia report by the U.S. Commission on International Religious Freedom explained the vague and arbitrary nature of Indian states’ anti-conversion laws.  According to the report, “the definitions of ‘induced,’ ‘fraudulent,’ or ‘coerced’ are expansive to the point that they could be interpreted to prohibit any kind of conversion, whether consensual or not.”

This concern remains true for the new law in Madhya Pradesh.  Local Christian leaders have expressed concerns that missionary work such as health care and education will be misconstrued as illegal “allurement for conversion.”

For instance, on December 31, 2020, a small Christian prayer meeting was attacked by radical Hindu nationalists in Madhya Pradesh.  The mob justified the violent attack by claiming they were stopping forced religious conversions.

Additionally, Sister Bagha, a Catholic nun and principal at a missionary school in Madhya Pradesh, was accused of forced conversion by a disgruntled teacher she had fired.  An investigation found no evidence that Sister Bagha had violated the law and a judge ruled that the allegations were untrue.

In total, the ICC received reports of at least 48 incidents of Christian persecution in Madhya Pradesh from January to mid-March 2021.  These documented events included false criminal accusations, physical assaults, intimidations, and church closures.

Though no person was convicted under Madhya Pradesh’s previous anti-conversion law, the religious persecution that such a law enables is despicable.

As ICC Regional Manager William Stark said, “Ultimately, anti-conversion laws provide legal cover for radical nationalists to attack India’s Christians and Muslims with impunity.  One simply needs to claim someone was engaged in forceful conversions to justify an assault.”

There is a real possibility that more anti-conversion measures could be implemented in India.  Fortunately, attempts to nationalize such laws have been unsuccessful thus far.

Earlier this month, the Supreme Court of India rejected and forced the withdrawal of a petition that would have laid the groundwork for nationalizing anti-conversion laws.  The challenges against religious freedom, however, remain at the state level.  Reportedly, the governments of Haryana and Karnataka are also considering legislation similar to the new “love jihad” anti-conversion laws in Madhya Pradesh, Uttar Pradesh, and Gujarat.

Rather than adopting new anti-conversion laws, states in India should repeal those that have been enacted.  There is precedent for this, as Tamil Nadu repealed its anti-conversion law in 2004.  The right to worship freely is an unalienable right that should not be limited or confined by state borders.