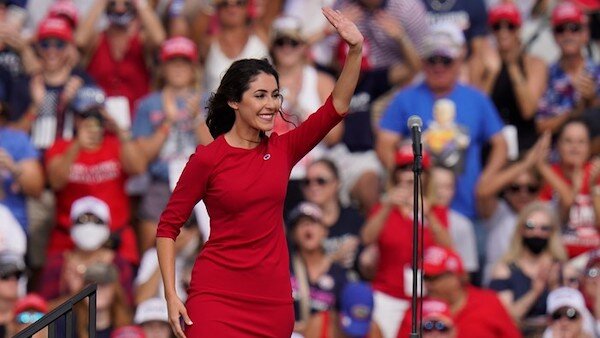 If you would’ve told me even five years ago that I would be political, let alone one of the most prominent conservative Hispanic leaders in the country, I probably would’ve laughed.

The truth is, I never anticipated being here. But, like most life events, you never anticipate incredible things happening. And little did I know that coming out as a conservative would bring me to where I am today.

People like me are typically supposed to end up as statistics. Had I fit in to that narrative, I probably would’ve ended up 16 and pregnant, a high school dropout, and strung out on drugs. It’s pretty shocking once you write that on paper, but the truth tends to do that from time to time.

The one thing I believe set me apart was God’s intended path for me.

I was raised by a young single mother who had me at 20 years old. Much as my father loved me, he struggled with a severe drug addiction. I actually didn’t realize my circumstances were “abnormal” until I enlisted in the military at 19. In fact, when people look at me, they tend to think I’m “well-to-do” — a 20-something chick in Ugg boots and yoga pants.

I’m basically the walking reason you don’t judge a book by its cover. People naturally assume things. But here’s my truth, my story: I was raised in lower-income circumstances as a minority and had a family that was infected with both substance and physical abuse. I saw violence that most people couldn’t imagine and have lived more in my 32 years on this earth than most people experience in their entire lifetime.

But I never was one to look at myself as “less-than” or a “victim.”

It was quite the opposite. I knew I would do something great — my mom always had a premonition that I would. But I didn’t know what it would be.

After my time in the military, I was on track to go to medical school. I went down another path, though, because of something I truly believe in — the American dream.

There is a poem by Robert Frost called “The Road Not Taken,” which says, “I took the one less traveled by. And that has made all the difference.” That’s my story. I took a chance. I chose to fight for what I believe in. And now here I am, launching a brand-new podcast, Luna Talks with Anna Paulina, which just debuted this week and will come out every Friday.

My new podcast in partnership with iHeartMedia and Gingrich 360 is something I could have never imagined. My family comes from extremely humble beginnings. It has been difficult to start out in life how I did. And good luck finding someone else in politics from where I grew up.

But I tried. Sure, sometimes I failed. But when I succeeded, I succeeded greatly. I chose to work with iHeart and Gingrich 360 because I believe that it is my obligation — to give back to and defend this country, which has given me so much. Above all, America has given me the opportunity to succeed.

Regardless of how much the media pits us against each other, the one thing they can never take away is the impact the truth makes. And that is my objective: to tell the truths of the American dream and provide a real-life look at the stories that make us “us.”

Luna Talks is not just another political podcast. It’s life stories. It’s experiences. It’s me — raw, honest, and unafraid. It’s a young conservative Hispanic woman who should’ve failed, but because of the country I was born in, I succeeded.

To hear more about my story and the power of the American dream, check out the first episode of Luna Talks. And don’t miss me discussing all these ideas and so much more on this week’s episode of Speaker Newt Gingrich’s podcast, Newt’s World. Speaker Gingrich has provided me the opportunity to have a platform to reach out to all of you each week, and I am so grateful for that opportunity. I promise to make the most of it.