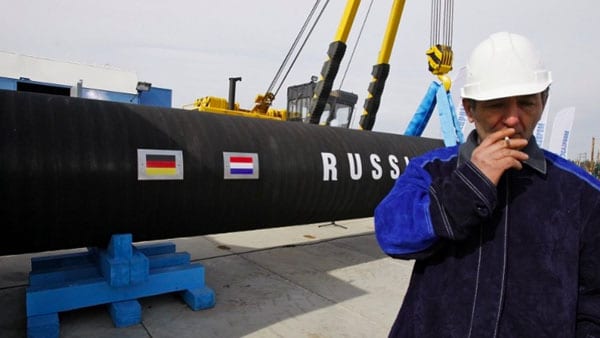 Simply put, Biden’s “strong” posture toward Russia is all talk, a façade hiding a weak and crumbling backbone.

Last month, the 46th president called Vladimir Putin a “killer” and warned the Russian leader he would “pay a price” for interfering in American elections. Biden also boasted that he once looked Putin in his eyes and said, “I don’t think you have a soul.”

And then this week, during Biden’s address to a joint session of Congress, he said he “made it clear” to Putin that his actions “will have consequences.”

Man, how is Putin sleeping at night?

Probably like a baby, because Biden’s tough-guy act is clearly just that: an act to boost his image — fodder for our Russia-obsessed media to eat up.

Simply put, Biden’s “strong” posture toward Russia is all talk, a façade hiding a weak and crumbling backbone.

Indeed, when it comes to actual policy, the actions don’t quite match the rhetoric.

Earlier this month, for example, the Biden administration canceled plans to send Navy destroyers to the Black Sea, which is crucial to Russian strategy. No matter what the administration says, the reason for canceling the naval deployment is obvious: Biden fears an escalation with Putin that gets out of control.

In fact, Biden said in his big speech this week that he’s “not going to seek escalation” with Russia. And two weeks earlier, when Biden actually did something tough and imposed limited new sanctions on the Kremlin, he made clear that “now is the time to de-escalate” and that “the way forward is through thoughtful dialogue and diplomatic process.”

Putin’s got the message loud and clear: Escalate, and Biden will back down. So much for deterring Russia.

The Black Sea is hardly the only situation where Biden’s been weak on Russia. Earlier this year, massive anti-government protests erupted in Russia after Putin attempted to poison his chief opponent, Alexei Navalny, and then imprisoned him in Russia. If Biden were serious about hurting Putin, he should’ve supported the protesters and called on Putin to step down from power. Biden did no such thing.

Yes, Biden wants to be tough on Russia — but without upsetting the Kremlin too much. Which means he will make some statements that sound good but do nothing consequential to check Russian aggression.

Unless Biden takes the opportunity now to stop the construction of Nord Stream 2, a Russian gas pipeline to Europe. Completing the pipeline is one of Russia’s most important foreign policy objectives, as it will not only put a lot of money in the Kremlin’s pockets but also give Moscow significant leverage over Europe — especially US allies like Germany.

Lawmakers on Capitol Hill are currently moving bipartisan legislation through Congress that would require the Biden administration either to impose sanctions on 20 companies involved in the pipeline’s financing and construction or explain why they deserve exemptions. While Biden has said he opposes Nord Stream 2, he has been reluctant to place new sanctions on Russian and European companies to halt the project.

Simply put, you can’t be tough on Russia without being tough on Nord Stream 2.

In fairness, the pipeline is mostly built at this point, making it unlikely that Biden will be able to prevent its final construction — even with quick action. However, the question of whether Nord Stream 2 sees the light of day will depend largely on how far Biden is willing to go to stop the project. Is he up to the challenge?

And even if he can’t stop Nord Stream 2, trying to do so would present an importance message to the world: The US does not endorse this pipeline, and those who use it may face consequences.

Biden spent four years calling his predecessor a Russian stooge. The problem for Biden is that same “stooge” deployed American warships to the Black Sea regularly and imposed sanctions to prevent the construction of Nord Stream 2.

It would be laughably hypocritical if Biden choose not to do against Russia what even an alleged Russian stooge was willing to do.

But hey, at least Biden once told Putin he has no soul. That’ll show him.