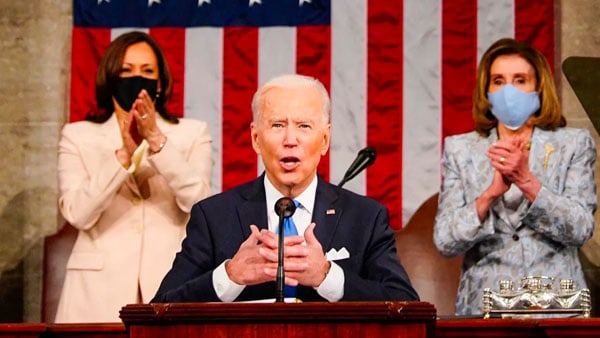 Biden’s agenda, which the Democrats and the media endorse, would make the American people dependent on the government literally from cradle to grave.

The news media continues to push the narrative that President Biden is the new Franklin D. Roosevelt (FDR), a liberal hero with an ambitious agenda to transform America. Unfortunately, they may be right in one sense: Biden, like FDR before him, is intent on expanding the role of government in our lives significantly and permanently.

FDR’s biggest impact, outside his leadership during World War II, was creating the social safety net, which still exists today. The safety net is government assistance meant to “catch” those citizens who are really hurting, especially through no fault of their own. The point is to help those who can’t make it on their own — orphans, the elderly, the mentally and physically disabled — to one degree or another.

Of course, the safety net has evolved over the decades, but the basic foundation really started with FDR. And conservatives have, by and large, come to accept this system as an important part of a just and moral society. But limited government means drawing a clear distinction between a safety net and universal entitlements.

This isn’t good enough for Biden, who wants to eliminate this distinction and grow government in a permanent and fundamental way. Indeed, he seeks to stretch the safety net to the point that we’re all caught in it, unable to escape, no matter our circumstance in life.

In short, Biden wants to create a full-on nanny state.

Despite its benign name — aren’t nannies so sweet? — the nanny state is anything but. It describes a system of government that is overprotective and interferes unduly with personal choice. Citizens are relegated to the role of children, lacking true freedom and subjected to the whims of the parental state.

Biden’s agenda, which the Democrats and the media endorse, would make the American people dependent on the government literally from cradle to grave. Consider, for example, the American Families Plan, which Biden unveiled during his address to a joint session of Congress last week.

The plan, which Biden priced at $1.8 trillion but may actually cost $2.5 trillion, would insert the federal government right in the middle of some of the American family’s most important and personal decisions.

Sure, on the surface, aspects of the plan sound nice: universal preschool, new childcare programs, paid family leave, “free” community college, more spending on welfare and health care. But this is all fluff, distracting from the massive new taxes created by this plan while failing to address reforms that would actually foster greater family stability. And in the process, families would be left with fewer opportunities while the federal government would gain greater control over their lives.

The American Families Plan is part of what the left is now calling “social infrastructure,” an almost Orwellian phrase that can mean whatever elites in Washington want it to mean. It suggests government engaging in social engineering to redistribute wealth as it sees fit — without any limiting principle to prevent gross governmental overreach.

Most Republicans would support a bill, even an expensive one, to fund the construction of roads, bridges, better broadband in rural areas — in other words, real infrastructure. But Biden and Democrats are instead pushing historically expensive legislation to advance a far-left wish list under the guise of social infrastructure.

Even Biden’s proposal for actual infrastructure, the American Jobs Plan, is really just a list of progressive priorities — less than five percent of the $2.25 trillion plan would be spent on traditional projects to build roads and bridges.

But even if we ignore the left’s impressive ability to stretch the meaning of the term “infrastructure,” the simple fact is these plans won’t work. We know because we’ve already tried them

Perhaps never. Or perhaps this is the wrong question, because success isn’t the main goal here.

Consider what Rahm Emanuel, the Chicago Democrat, recently told the Washington Post about the American Families Plan: “Once everyone’s in, all the parents want it. Then it’s not a poor person’s program or a poverty program. It’s an educational program,” he said. “That to me, that is essential. It changes the public center of gravity once it’s for everybody.”

That sounds like a plan to gain greater control, not to help people. And that’s precisely the point: Sure, Democrats supporting Biden’s agenda want to do good, but they’re real goal is get the American people, especially middle-class Americans, totally reliant on government — and therefore reliant on the Democratic Party, which champions government.

Biden won’t be remembered like FDR, who governed during two of America’s most memorable events: The Great Depression and World War II. But when it comes to expanding government, Biden may well follow in FDR’s footsteps, redefining the relationship between citizen and state.

FDR gave us the safety net; Biden may give us the nanny state. If Biden does indeed create an unprecedented cradle-to-grave government, he may live up to the news media’s hype.

And the American people will suffer as a result, losing precious freedoms while the government accelerates the country’s drive toward fiscal doom.