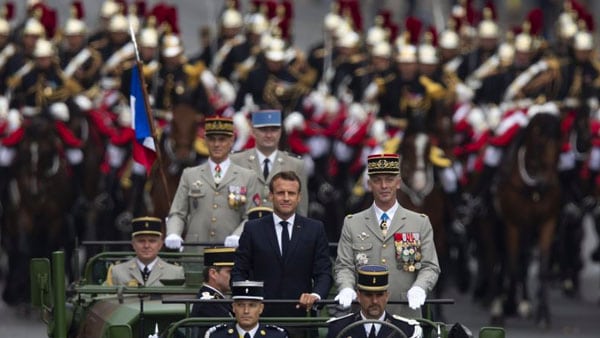 France, once a great nation, is disintegrating right before our eyes. The real culprits are not the Islamists, however; they are anti-racism and multiculturalism, dangerous ideas smartly named to hide a radical agenda.

As much as Americans like to tease the French, we should remember that France is our oldest ally. And the French, who really invented the nation-state, are a proud people with strong traditions.

In other words, patriotism is a powerful, unifying force in France — just as it is in America.

This makes it all the more troubling to see what’s been happening in France in recent years: disintegration.

Late last month, more than a thousand former members of the French military, including 20 retired generals and dozens of officers, signed an open letter warning of the “mortal dangers” they say face France. Specifically, the letter expresses concern that France is sliding toward civil war as the government fails to control mass migration and growing Islamism.

The warning comes amid an onslaught of jihadist attacks in France, including the beheading of a school teacher who showed his students cartons of the Prophet Muhammad during a class on free speech.

More recently, France’s highest court ruled that a Muslim immigrant from Mali could not be held criminally responsible for brutally murdering an elderly Jewish woman while shouting “Allahu Akbar” because he was high on marijuana at the time — and therefore in a “delusional fit.”

Tragically, none of this is so surprising. For decades, France has allowed large-scale immigration from Africa and the Middle East, without encouraging any of the newcomers to integrate. The result is a powerful Muslim minority establishing so-called no-go zones, which are nothing less than foreign enclaves on French territory.

Still, the government is furious at the signatories, especially the 18 who are active soldiers. French President Emmanuel Macron and the military brass have vowed to punish them.

But a majority of the French public, 58 percent, actually support the soldiers who signed the letter. That’s according to polling by Harris Interactive, which found a number of alarming results.

France, once a great nation, is disintegrating right before our eyes. The real culprits are not the Islamists, however; they are anti-racism and multiculturalism, dangerous ideas smartly named to hide a radical agenda.

Indeed, despite the name, anti-racism doesn’t actually mean opposition to racism. It means believing our society is evil, systemically racist, and needs to be overhauled with a sledgehammer to tear down our (allegedly racist) culture and traditions.

Combine this with multiculturalism, which has allowed Islamism to thrive in France through a militant commitment to political correctness, and the result is the erosion of the foundations of the French Republic.

To quote the letter, France’s disintegration is being caused by this type of anti-racism, which has a single goal:

to create division, even hatred, between communities on our soil. Today, some speak of racialism, indigenism, and decolonial theories, but by using these terms, hateful and fanatic partisans are trying to spark a racial war. They despise our country, her traditions, and her culture, and, by attempting to erase her past and her history, want to see her relegated to the dustbin of history. With this objective, they destroy statues and twist centuries-old words and phrases, all to overturn our past military and civilian glories.

There’s a warning here for America, which is at risk of heading down a similarly woke and destructive path toward “social justice.” We see the efforts of the hard left, increasingly embraced by the Democratic Party, to distort and erase our history, to demonize our country, to erase the agency of the individual and divide us monolithically by race, ethnicity, and sexual orientation.

This poison has already sparked civil unrest and risks fostering hate between our communities, as it has in France.

We should view this threat as political as much as cultural. Just look at the current initiatives by Congress and the Biden administration to kill the filibuster, pack the Supreme Court, federalize the electoral process, and radically expand the role of government. Democrats are framing each one as anti-racist, a moral imperative to force social justice on an American system they claim is defined by bigotry.

It remains to be seen how much of this agenda will actually be implemented, but much of it is in the works.

As the late Charles Krauthammer wrote, decline is a choice. Just ask France.