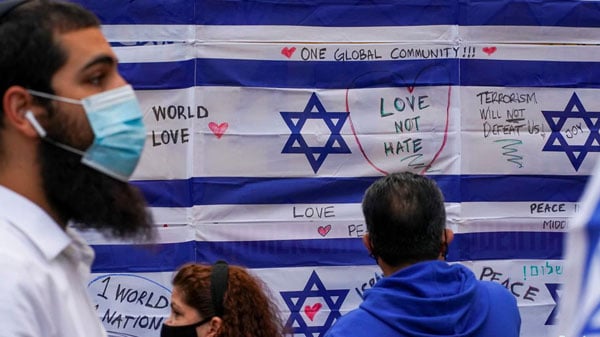 I also ask that you speak out against the rising tide of anti-Semitism that is masking itself behind the anti-Israel attacks. It is important that the Jewish community know that they are not alone. – from eyewitness to terror.

In the middle of the lies being told about Israel and the rising tide of open anti-Semitism (as in the New York City attacks on Jews) I received a letter which is from a personal eyewitness. It is so clear and compelling that I felt I had to share it with you. I have removed the last name of this person because I don’t want her to become a target:

I am writing to you after 10 days of pure hell. It took me a while to decide to write this and I ask of you to please read it all. I haven’t been sleeping much and met some neighbors in the bomb shelter with very interesting pajama choices. After being very happy that covid19 had ended in Israel, as we were the first country in the world that came back to a normal life, this could not have depressed me more.

I don’t know your politics and this email won’t declare mine, since this isn’t about left and right but about human life. I know social media has shown a one-sided image of what is going on in this two-sided conflict, but I hold all of you to a higher standard than to consume truths from infographics.

I have always said I am pro-Jew, pro-Muslim and pro-Christian. What I mean by this statement is that I’m pro-life and anti-terror. Hamas is a terror organization, the 3rd richest terror group in the world (700M$ a year) and has violently taken over the Gaza Strip and have been ruling there till this day. They are funded by Iran and hold the same ideology. This includes no women’s rights, no LGBTQ+ rights, no democracy. The money that they receive goes to funding terror instead of education, health and prosperity for the people in Gaza. So are we to feel bad for the people in Gaza, YES, does Israel help the people in Gaza, absolutely, does Hamas take care of their own people absolutely not.  These facts you don’t see or read about in the media.

Since May 10th, Israel has been attacked by Hamas with over 4,000 rockets (yes, 4,000). These were launched from kindergartens, civilian homes, hospitals, schools and underground tunnels which are located under residential buildings. They stack their weapons in residential areas and in religious sites such as mosques. I am sure you’ve heard about the building we destroyed where the associated press is based. This was also a main base of Hamas.  You should know that the employees of AP were aware of its existence and know that Israel was right to take this action. Simply, Hamas’s rockets are aimed at Israeli civilians (Jews, Arabs and Christians) and they have killed Israeli’s no matter their religious background.  When the IDF is attacking in Gaza, we attack only the places that store and send rockets to our innocent children and families. You should also know that before we do so, we reach out to the people that live/work in those places via SMS or noise bomb that alerts them to evacuate. We give them an hour to get out from the premises like we did at the AP building. We do this to avoid civilian injury or loss of life of innocent Gazans. What Hamas does is the opposite. They full these storage and launching sites with innocent civilians. They do this to stop the IDF from destroying their terror bases. They also want to create horror pictures of injured or dead children and parents. Their goal is not to preserve their people’s lives but to exploit them and create a negative view of Israel that these horrible images represent to the masses.

I also ask that you speak out against the rising tide of anti-Semitism that is masking itself behind the anti-Israel attacks. It is important that the Jewish community know that they are not alone and that they need not hide their religion in fear of being attacked as is happening in cities like LA, NY, London and other cities around the USA and Europe.

Finally, I ask of you that make sure you get your information from a credible source. Any credible source and not the biased media outlets looking to wrongfully condemn my nation.

Hoping for a brighter, peaceful, and secure world,