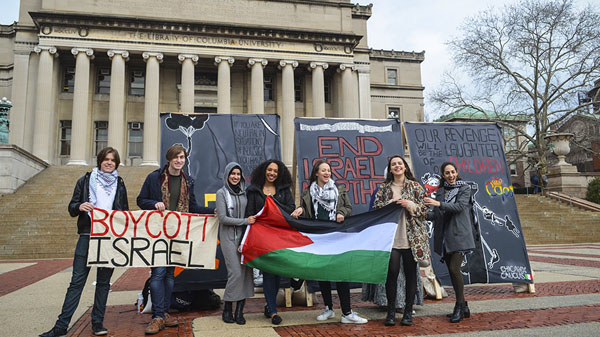 Tragically, college campuses have become breeding grounds for anti-Israel and anti-Jewish animus. But even more tragically, so too have some of our K-12 schools.

The alarming surge in antisemitism over the past few weeks shows Jews aren’t safe in the West. Across the US and Europe, Jews are being harassed, threatened, assaulted, demonized, and intimidated. Wear a yarmulke in New York or attend synagogue in Germany, and you could be next.

Yet PhDs at universities across the country don’t seem to recognize — or are afraid to acknowledge — the obvious link between antisemitism and demonizing, delegitimizing, and applying double standards to Israel. And in so doing, these professors and administrators are not only tolerating hostility toward Israel but also fostering hostility toward Jews.

The story began last Wednesday, when the school Chancellor Christopher Molloy, and Provost Francine Conway, sent a message to the campus condemning antisemitism amid a rise in antisemitic violence.

The statement was weak, but it was still too much for Rutgers’ chapter of Students for Justice in Palestine (SJP), which castigated the chancellor and provost for their statement. SJP seemed to argue that antisemitism shouldn’t be condemned at all until the group’s grievances with Israel are resolved. If that sounds like an open initiation to attack Jews, that’s because it is.

Shamefully, the chancellor responded by apologizing for his initial note. Yes, that’s correct: He apologized for condemning antisemitism.

Why? The chancellor felt his initial message “failed to communicate support for our Palestinian community members. We sincerely apologize for the hurt that this message has caused.”

That’s not all. “Our diversity must be supported by equity, inclusion, anti-racism, and the condemnation of all forms of bigotry and hatred,” Molloy wrote. “We will work to regain your trust, and make sure that our communications going forward are much more sensitive and balanced.”

Whose trust does he want to regain? Certainly not the Jews’. But that’s the point: Anti-racism, social justice, wokeness — it’s all about fighting for the oppressed, except the Jews. Those who don’t recognize this reality haven’t been paying attention.

To quote the writer John-Paul Pagano, this situation marks a dark and “sinister escalation in progressive disregard for Jewish welfare.” (It’s also worth noting that SJP wasn’t even satisfied with Molloy’s apology.)

Rutgers President Jonathan Holloway then posted a statement clarifying that the university opposes “all forms of racism, intolerance, and xenophobia,” including antisemitism. But it was too late. The damage was done, and the school conveyed its message loud and clear: Denouncing antisemitism is anti-Palestinian — and therefore oppressive.

Of course, Rutgers is hardly the only school that fosters anti-Jewish hate. At Harvard, the faculty recently published a statement “in support of Palestinian liberation” that accused Israel of “apartheid,” “territorial theft,” and “violent displacement” — in other words, ethnic cleansing.

At the same time, vandals targeted Harvard’s Jewish center, shattering a window and zip-tying a Palestinian flag to the front door. Surely the perpetrators were just legitimately criticizing the Israeli government for its apartheid policies. No antisemitism to see here.

Tragically, college campuses have become breeding grounds for anti-Israel and anti-Jewish animus. But even more tragically, so too have some of our K-12 schools.

In New York, the “culturally-responsive committee” at Schenectady High School recently sent a schoolwide email suggesting teachers refer to the actions of the Israeli government as “ethnic cleansing” and “colonialism.”

The committee, which works to advance the school’s goals of equity and anti-racism, included a list of “words to use” and “words not to use” in class when discussing the Israeli-Palestinian conflict.

Words to use list included apartheid, colonialism, ethnic cleansing, boycott Israel, and anti-Zionism. Words not to use included clash, war, both sides, and conflict.

“As we continue in our anti-racism journey, it is important to bring attention to the injustices that have escalated against Palestinians in recent weeks,” said the email, which the Daily Gazette obtained. The email also offered staff across the school resources on the Palestinian perspective.

Simply put, the adults entrusted with shaping the minds of American students are indoctrinating them to revile the Jewish state.

This would be bad enough as the false, anti-intellectual poison that it is. But even worse, as the past few weeks have shown, this is a recipe for fostering anti-Jewish hate, which will lead to even more antisemitic violence.

And those most responsible for allowing this hate to fester and grow aren’t neo-Nazis; they’re progressive, who are disregarding Jewish welfare in the name of anti-racism. How they expect to fight bigotry with bigotry remains a mystery.