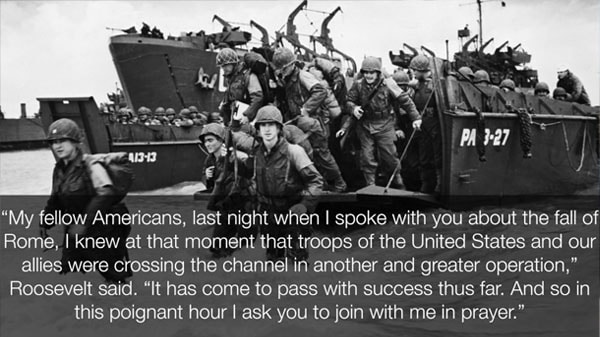 On the anniversary of D-Day, we remember the sacrifices made by our service members. In 1944, FDR led the nation in prayer; join me in asking your local radio station to play this prayer in remembrance of D-Day.

I want to ask you to consider calling your local radio station and asking them to play this on Sunday. On the night of D-Day in 1944, President Franklin Delano Roosevelt led the entire nation in a prayer as American and British allied forces landed in Normandy. In this day of government hostility towards religion and widespread secularism, this prayer is important to remember that there was a time when even the liberal Democrats like Franklin Delano Roosevelt would go to God publicly, without any embarrassment.

I’m urging every radio station to play President Roosevelt’s prayer on Sunday in commemoration of the 77th anniversary of the greatest single military operation ever undertaken: the landing in Normandy by American-led allied forces.

If you have questions for Newt, you have a chance to get them answered during Newt Live events. All you have to do to attend the events is join Newt’s Inner Circle. It is an amazing opportunity you don’t want to pass up. Join today with the link below!