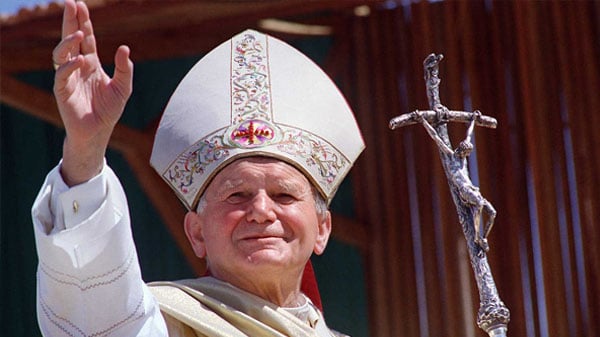 Saint John Paul II’s profound commitment to faith, freedom, and human dignity made him one of the most influential men of the 20th century.

Born Karol Jósef Wojtyla on May 18, 1920, in Wadowice, Poland, he studied for the priesthood in secret as a young man in Nazi-occupied Poland and was ordained in 1946.

John Paul II made history on October 16, 1978, when he became the first non-Italian pope in over 400 years.  His encounters with fascism, anti-Semitism, and communism in his homeland shaped his lifelong opposition to evil.

Leading up to his pontificate, he endured decades of destruction and despair alongside his Polish compatriots, first at the hands of the Nazis in 1939 and then at the hands of the Soviets in 1945.  As Newt and I highlight in  “Nine Days that Changed the World,” millions of Poles struggled to survive amidst the violence, oppression, and suffering of the 20th century.

However, the one institution that remained largely intact amidst the turmoil of 20th century Poland was the Catholic Church.

In June of 1979, as millions of Poles suffered under the communist Soviet regime, Pope John Paul II embarked on a pilgrimage to his homeland to commemorate the ninth centenary of the death of Saint Stanislaus.  His historic nine-day pilgrimage would change the world.

Millions of Poles, almost one-third of the nation, turned out to see the Holy Father between June 2-10, 1979, while the rest of the country and the world followed his trip on television and radio.  On the first day of his pilgrimage in Warsaw, John Paul II declared, “There can be no just Europe without the independence of Poland marked on its map!” As a country that had disappeared from 1795-1918, this was an especially powerful statement of Polish identity in a dangerous world.

The Holy Father’s pilgrimage in 1979 marked a significant turning point for the Polish people from communism toward freedom and liberation.  His plea for freedom in Poland in 1979 was also a source of strength for millions around the world.

As the Pope spoke to the crowds about truth, faith, and freedom throughout Poland, he reignited the spirit of the Polish people which the communists had tried to extinguish for decades.

John Paul II’s support for the Poles in their struggle against communism eventually led to the Solidarity movement, which won unprecedented government concessions including the right to strike and the establishment of the first independent trade union in a communist country.

Across the world, a future U.S. president heard the Pope’s calls for freedom.  At the time, former Governor Ronald Reagan was in California and hosted a popular radio show.  Reagan dedicated numerous broadcasts to Pope John Paul II’s historic visit and in one broadcast, said, “It has been a long time since we’ve seen a leader of such courage and such uncompromising dedication to simple morality.”

Just a few months later, in November 1979, Reagan announced his candidacy for President of the United States.  President Reagan and Pope John Paul II would eventually form one of history’s most important diplomatic relationships that, as Reagan said, “would exist to the benefit of peace-loving people, everywhere.”

Together they inspired a movement that defeated communism with the fall of the Berlin Wall in 1989 and the collapse of the Soviet Union in 1991.

As we reflect upon the legacy of Saint John Paul II, it is important to remember that his historic pilgrimage to Poland in June of 1979 created a revolution of conscience that reshaped the spiritual and political landscape of the 20th century.