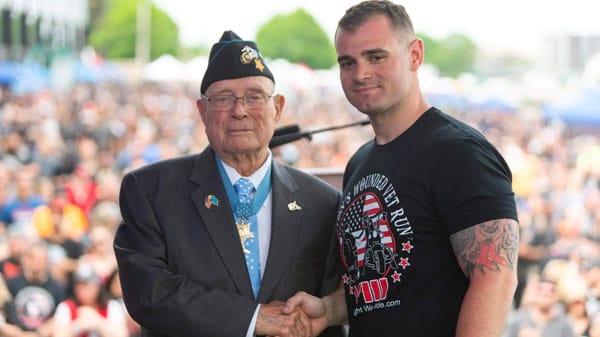 After Andrew Biggio bought a 1945 M1 Garand rifle, he brought it over to show his neighbor, World War II veteran Corp. Joseph Drago. When Drago held the rifle in his hands, his eyes lit up. The frail, elderly man was suddenly overcome with a burst of energy and began talking about the Battle of Okinawa. The rifle had unlocked memories that Drago had kept unspoken for 50 years.

When Drago was done speaking, Biggio, a veteran himself who served in Iraq and Afghanistan, asked his neighbor to sign the rifle. The young Marine always wanted to remember those precious hours.

Thus began Biggio’s mission to find as many World War II veterans as possible, record their stories, and collect their signatures on his rifle.

This two-year mission led Biggio on a journey across the United States, to every corner of the country. He found soldiers from each theater, each service branch — he wanted to represent the whole war on his rifle.

The result of all this was a new book, The Rifle: Combat Stories from America’s Last WWII Veterans, Told Through an M1 Garand, which came out earlier this month. Biggio’s work is a treasure trove of memories and wisdom from some of our nation’s last living veterans of history’s costliest war. Their stories are raw, honest, inspiring, and heartbreaking.

I was fortunate enough to interview Biggio on the latest episode of my podcast, “Newt’s World,” and hear some of these stories. Biggio, a police officer, is also the founder of the Boston Wounded Vet Ride, which raises money for wounded veterans.

What’s so striking about these veterans is that they were just regular Americans — ordinary men thrown into an extraordinary time, as Biggio phrased it. Many of them went on to become police officers, firemen, doctors, teachers, lawyers. But they are all genuine heroes, as were those who died fighting for their country.

Indeed, that 19-year-old worker at a refrigerator factory in Kentucky who died storming the beaches of Normandy, and that 25-year-old highway laborer from Pennsylvania who was killed in Iwo Jima, did more for the American people than anyone serving in government today could ever hope to do. They saved Western civilization, plain and simple.

We are all forever in their debt — and therefore owe it to the members of the greatest generation to ensure their legacies live on.

This is why Biggio’s project is so important: Today, a tiny sliver of the 16 million Americans who served in World War II are still alive. And, sadly, they are dying quickly. It is our sacred duty as a nation to document and cherish their memories. We can all learn from their insight and experiences, just as Biggio did, and transmit their values to future generations of Americans.