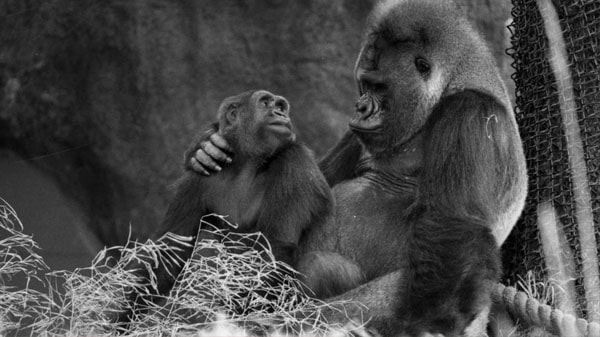 Atlanta lost one of its leading examples of fatherhood with the death of Willie B. on Feb. 3, 2000. He was 41 years old on the occasion of his passing, the oldest gorilla to sire offspring in North America. His story is a living metaphor for the resilience of the zoo itself, a 25-year transformation from industry pariah to global leadership. My newest book, Atlanta’s Iconic Ape: The Story of Willie B., will be published in time for the Christmas season. If the reader examines carefully the great silverback’s story, his life is alive with lessons for all of us.

Given the poverty of his early years at the zoo, Willie B. was the original “comeback kid.” As he endured the stressors in his captive life, he proved to all of us that no situation is so dire that it cannot be overcome. The zoo had to learn to persevere from Willie B.’s trials and tribulations. In the end, somehow, he reached his full potential, and we had to do the same.

His capture in Africa was brutally executed by hunters with no concern for casualties. There was no public record of the hunt, but the first casualty of such encounters was almost always the dominant patriarch of the group. At the age of two, Willie B. lost his father and his mother before he even knew them. His arduous translocation to America threatened his very life, but he managed to survive and cope with the demands of captivity. In Atlanta, he was given the name of the city’s charismatic mayor, William, B. Hartsfield, who governed for 25 years. Mayor Hartsfield’s personal interest in the little gorilla helped to raise his profile.

In Willie’s adolescence, with few exceptions, America’s zoological parks were substandard examples of “hard architecture.” Confined alone in a small concrete, steel, and tile enclosure, his social life was comprised of interacting at a distance with his devoted keeper, Charles Horton. With almost no social experience with his own kind, Willie’s opportunity to become a silverback took many years before it became a priority for city fathers. Mediocrity was not enough to motivate reforms, but a management scandal threatened the good reputation of the business community, and citizens soon rallied to the cause. Working with prominent business leaders, Mayor Andrew Young led the way to an emerging public-private partnership that proved to be the right governance model for the zoo.

The model was complete when the Ford Motor Company stepped up to provide essential private funding for a new gorilla exhibit. The design team comprised of world class zoo architects, Coe and Lee, and highly regarded local construction firms produced the Ford African Rainforest. When it opened in 1988, it was the most advanced gorilla exhibit in the world.

The key to Willie’s future was the loan of 13 gorillas from Emory University’s Yerkes National Primate Research Center. A critical mass sufficient to encourage breeding, it was the most important loan of endangered animals in the history of North American zoos. With so many gorillas available to zoo managers, it didn’t take long for Willie B. to get his chance to interact with his own kind. He proved to be a quick study and got along well with every female who was introduced to him.

Willie B. sired five offspring, four females and one male who we dubbed “Willie B. Junior.” Junior still lives at the zoo where he is the resident silverback in his own family group. Because we studied Willie B. and the other Yerkes gorillas, we know that he was an unusually doting father.

He was a strong role model for his offspring, actively controlling conflict among the adult females, but the youngsters found him irresistible and did their best to engage him in bouts of play. More than any of the other silverbacks at the zoo, Willie was accommodating in play. He clearly liked to interact with the little gorillas, and he did so in a gentle, tolerant way. Unusual for a silverback, he even let them share his food.

Willie B. was an inspiring father figure. He overcame so many obstacles in his life to become the successful silverback for which we hoped. In nonhuman primates, young animals are typically scarred for life when they are raised without a mother and father. This is why it is so important to establish normal social groups for each species in human care. People too suffer when they are raised in households with absentee mothers and fathers. Fathers are particularly important to young men as they act as a constraint on aggression.

Mike and I were fortunate to grow up in stable households with strong fathers. Mike had four brothers and I had two. They all turned out well and we give our father’s much of the credit for our disciplined approach to our lives and careers. Mike has a grown daughter and I have three. Our paternal experience has been the highlight of our lives. Like Willie B., we paid a lot of attention to them when they were little and stayed involved in their life as they grew up. They too turned out well. For gorillas and for people, the family is an essential feature of a full life.

What we learned from Willie B. is worth repeating. Resilience is always possible. Be patient and tolerant of others. Avoid aggression in the family. Become the social glue that strengthens the family bonds. Vigorously defend your family against all adversaries.

Although Willie B. is no longer with us, gorilla families are still thriving at Zoo Atlanta. We recommend that they be studied and appreciated for what they can teach us. On Father’s Day each year it is a good time to remember Willie B. by widely sharing his remarkable story. Like Willie B., no matter what comes our way, we will not be discouraged or defeated.