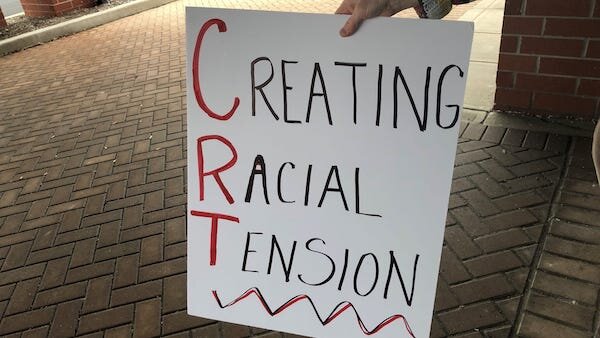 Critical race theory (CRT) is now center stage in the culture war between left and right, emerging in recent months as one of the nation’s most contentious issues. On the surface, it may seem progressives are winning as CRT infects schools across America, but the fight against this racist indoctrination is really a winning issue for conservatives.

According to CRT, racism is a social construction that pervades every aspect of American life, benefiting all white people (regardless of their socio-economic standing) at the expense of non-white people. Advocates of CRT believe the solution is to undo many of the cornerstones of American society. The theory is a form of cultural Marxism based on race rather than class.

The media portrays CRT as a serious academic field confined to law schools. MSNBC guest host Zerlina Maxwell, for example, said last week that CRT “refers to the study of structural racism and it’s not taught until college or graduate school, law school. It’s a law school class, everybody … So, let’s start by making it completely crystal clear at the top of this interview, that critical race theory is not taught before law school.”

CNN analyst Natasha Alford similarly claimed that “lies about the so-called dangers of critical race theory have spurred legislation against teaching what is normally taught in law schools.”

It’s telling how adamant the left is about CRT only being taught in law school. Evidently, they know how bad it would look for CRT to be taught to younger kids.

Which of course is happening across the county.

In Cupertino, CA, an elementary school forced third-graders to deconstruct their racial and sexual identities and rank themselves according to their “power and privilege.”

In Springfield, MO, a middle school forced teachers to locate themselves on an “oppression matrix,” based on the idea that straight, white, English-speaking, Christian males are members of the oppressor class and must atone for their privilege and “covert white supremacy.”

And in Seattle, the school district told white teachers that they are guilty of “spirit murder” against black children and must “bankrupt [their] privilege in acknowledgment of [their] thieved inheritance.”

Some school boards claim they don’t teach CRT, but an examination of their curricula reveals they’re in fact teaching CRT. Indeed, Highlands High School in Fort Thomas, KY amended its curriculum in an elective course to teach “social equity,” while the content of what was being taught aligned with the premises and goals of CRT.

In Loudoun County, VA, the superintendent wrote in an email that, while the county’s public schools have “not adopted CRT, some of the principles related to race as a social construct and the sharing of stories of racism, radicalized oppression, etc. that we are encouraging through the Action plan to Combat Systemic Racism, in some of our professional learning modules, and our use of instructional resources on the Social Justice standards, do align with the ideology of CRT.”

It’s fitting that, just this week, a school board meeting in Loudoun County was cut short to limit public comment. The crowd became unruly as people argued for both sides and, ultimately, the school board had the room cleared.

Parents don’t want their children learning CRT — and are increasingly willing to say so publicly.

Loudoun County isn’t alone. There was a similar scene at a school board meeting in Fort Worth, Texas this week.

What’s happening is the American majority finally finding its voice — and speaking up in a big way. Indeed, a recent poll showed that 58 percent of Americans find CRT somewhat or very unfavorable. Only 38 percent said they viewed CRT favorably.

The American people oppose CRT. Which is why opponents of the theory overwhelmingly won school board races in Southlake, Texas earlier this year.

The bottom line is, abolishing CRT in public schools is a winning issue for conservatives. But they need the courage to speak up and the knowledge of what CRT really is to do so effectively.

All these issues are discussed this week on my podcast, “Newt’s World.” Rob Smith, host of the “Rob Smith Is Problematic” podcast, guest hosts for me and has on Ryan Girdusky as his guest. Girdusky is the founder of the 1776 Project PAC, which is dedicated to electing school board members who oppose CRT, and the author of a new book out now titled, They’re Not Listening: How the Elites Created the National Populist Revolution.

As they discuss, the radical left appears to be winning the culture war over CRT. But ultimately, they’re fighting a losing battle. Because the American people know better and won’t be fooled by those pushing CRT on our children.