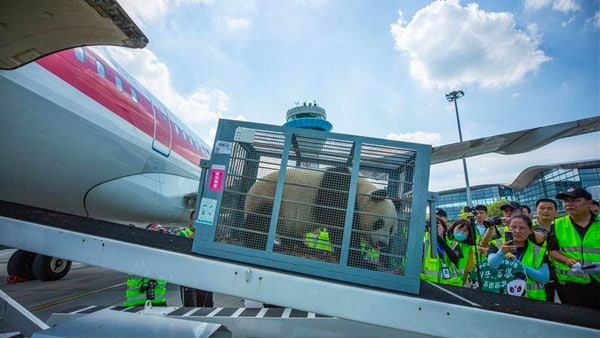 The contrast between Chinese progress and American paralysis has been growing greater and greater. And it’s a serious problem. This is my warning that America must compete or lose.

As I watched the boring, often stale, and long-running vaudeville-like performance over the infrastructure bill (which should be called “The Raising your Taxes and Giving Money to our Union Allies so They Have Work this Summer Act”) I kept watching the amazing steady progress of the Chinese Communist Party as it continued to build instead of debate.

The contrast between Chinese progress and American paralysis has been growing greater and greater. And it’s a serious problem.

We talk; they build.

We impeach; they build.

We campaign for office; they build.

As someone who loves the natural world – and has always loved the Giant Panda – I was delighted to discover that in the middle of our infrastructure babble, the Chinese had opened the huge, new, ultra-modern Chengdu Tianfu Airport. Chengdu is the headquarters for all activities involving the Giant Panda in China. It is famous to nature lovers everywhere.

Chinese domestic airlines have been growing steadily. Callista and I have been on several flights around China. The airports are always clean, the flight attendants are always professional, and each new terminal is more and more modern.

In developing the brand new airport in Chengdu, the Chinese have included facial recognition software, self-check-in kiosks (so you can go straight through to your plane), smart security systems, self-boarding gates, and even experimental airport robot staff (although, with 1.4 billion people, it is unlikely China will run short of people to staff an airport).

The Chinese Communist Party has had a massive interest in growing out China’s domestic transportation infrastructure. The Party knew it wanted high-speed trains to draw as many people as possible out of airplanes (given the population, it is simply impossible to build a big enough aviation system).

Today, there are 37,900 kilometers of high-speed railways in China, with the fastest going 210 miles per hour. As a signal that American politicians, interest groups, lobbyists, unions, and bureaucrats had better get their national goals together – just for our survival as a country – they ought to all go ride a Chinese high-speed train and then come home and ride the Amtrak Acela, which peaks at 150 miles per hour. Then, they should compare comfort, cleanliness, convenience, and service on the Chinese and American systems.

Domestic travel in China jumped 6.8 percent from April 2019 to April 2020. In part because of the impact of COVID-19, the Guangzhou-Baiyun airport replaced Hartsfield-Jackson Atlanta International Airport (which I had represented for 20 years) as the busiest airport in the world.

After pouring $10.8 billion into the new Chengdu Tianfu Airport, Chinese ambitions are accelerating – not shrinking. The current plans are by 2035 to add another 159 airports to the 241 that already exist.

Now, no one should read this as my endorsement of China’s totalitarian system – or as any sort of pro-China propaganda. This is my warning that America must compete or lose.

As a contrast between the Panda-inspired Chinese system and the partisan-pork-infighting-pettiness of the current American system, how many airports would you bet we could build by 2035? How many high-speed rails? Anyone who thinks we are going to compete with China without major domestic reform is simply delusional.

Of course, like my granddaughter, you can always have a stuffed Panda to hold while we slide into the past.