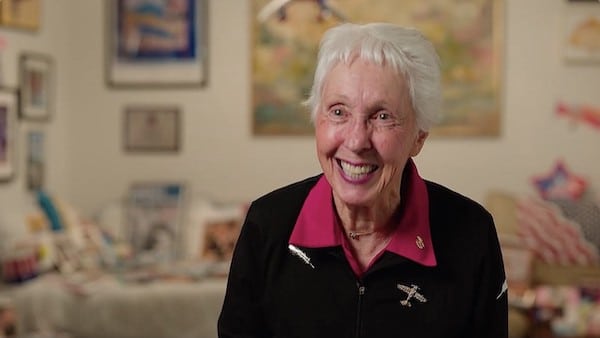 Mary Wallace “Wally” Funk always wanted to fly. She had her first flying lesson when she was nine years old and grew up making wooden planes, building treehouses, riding horses, biking, hunting, and fishing. As a young girl growing up in the 1940s and 1950s, Wally recalls, “I did everything that people didn’t expect a girl to do.”
Wally’s curiosity and love of flying, however, would ultimately shape the rest of her life. She obtained her flying license at Stephens College when she was in her teens, then joined the “Flying Aggies” aviation team at Oklahoma State University, where she earned a degree in education. Wally then got her first job at Fort Sill, Oklahoma where she was the only female flight instructor.
At the height of the Space Race, in 1961, when she was just 22 years old, Wally became infatuated with the idea of taking her passion for flying to the next level, as an astronaut in space.
At the time, NASA’s Mercury program, the first U.S. human flight space program, was fully underway. However, eligible astronaut candidates for NASA were restricted to military jet test pilots, a job reserved only for men.
Dr. William Randolph Lovelace, who conducted the medical and physiological tests for NASA’s male astronaut candidates, was curious if women could outperform men on these examinations. Using private funding, Dr. Lovelace set up an unofficial program to administer these same tests to women.
Wally Funk discovered Dr. Lovelace’s Woman in Space Program and was accepted at the age of 22 as the youngest of 19 participants in 1961.
Wally, and 12 other women, known as the Mercury 13, passed the rigorous physical and physiological examinations with flying colors and were selected to move forward into the next phases of testing. Wally recalls that she was even told that she “had done better and completed the work faster than any of the guys.”
But before these trailblazing women were given the opportunity to move forward, the program was disbanded in 1962.
Offering congressional testimony, vividly reflective of gender discrimination in 1962, astronaut John Glenn said, “The men go off and fight the wars and fly the airplanes and come back and help design and build and test them. The fact that women are not in this field is a fact of our social order.”
Yet the dismissal of the possibility of female astronauts did not deter Wally. She applied four times to NASA’s astronaut program, but was rejected after being told she didn’t have an engineering degree. When she tried to get an engineering degree, she was dismissed by a school administrator who told her “You’re a girl. Go to home ec!”
But, Wally said, “I never let anything stop me.”
She continued to pursue her passion as a flying instructor, logging in 19,600 flight hours and training more than 3,000 pilots. She also became the first female investigator for the Federal Aviation Administration.
Sadly, none of the members of the Mercury 13 had the opportunity to achieve their dream of becoming astronauts. However, on July 20, the 52nd anniversary of the Apollo 11 moon landing, Wally Funk will journey into space aboard Blue Origin’s New Shepard suborbital spacecraft. Sixty years after enrolling in the Women in Space Program as one of the original female aeronautical candidates, Wally will finally achieve her goal of flying into space.
Wally’s spaceflight is an inspiring testament to her resilience and determination to never give up.
Wally Funk and the bold women of the Mercury 13 ultimately paved the way for future generations of American women in space. Their bravery and determination throughout their training demonstrated that women could excel as astronauts and overcome the physical and mental challenges that come with spaceflight.
Since 1983, more than 40 American women have flown to space. With Wally Funk’s spaceflight, our nation celebrates her lifelong journey, as well as the courageous contributions of the Mercury 13.