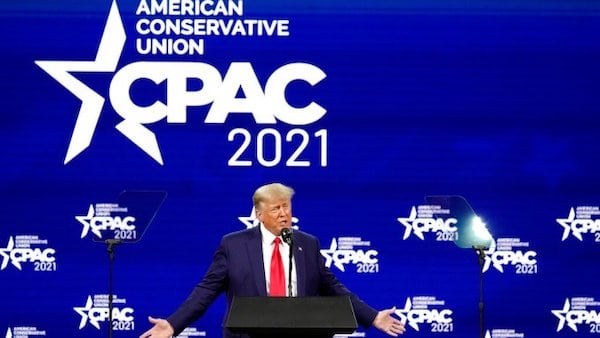 I thought Trump did very well and you could see it in the astonishing numbers. He had 70 percent for the nomination in 2024. Then there’s potential that the rebellion in Cuba is the real deal. Are Bernie Sanders, AOC and others really going to stand up for communism against freedom?

This has been a sort of triple header weekend. First there was, I thought one of the best speeches Trump has given long, but then when he speaks to a big crowd, it’s always long, but in covering major issues, doing it well, being positive, drawing an amazing contrast between the radicals and focusing on America. I thought Trump did very well and you could see it in the astonishing numbers at the CPAC poll in Dallas. I think 98 or 99 percent said that they supported what Trump had done in his first term. He had overwhelming, I think, 70 percent for the nomination in 2024 with Governor DeSantis, second at about 20 and nobody else, nobody above 1%. So it was really Trump’s weekend in that sense.

Second, the comments by Kamala Harris that people in rural America didn’t know how to use the Xerox machine and could get access to one and therefore they wouldn’t be able to vote. If we required identification came across to almost all, Americans is so unbelievably stupid that it’s just hard to believe. You could have a vice president in states that totally out of touch with reality.

Third, there is a potential, it’s not reality yet, but there is a potential that the rebellion underway and Cuba is the real deal. Is it the end of the administration down there? The dictatorship may have funny run its course. Interestingly my daughter, Kathy, who lives in Key Biscayne was saying that there’s a real focus by Cuban Americans and a real sense that this may be different. So a lot of different things: Trump, Harris, potential end of communism in Cuba and a real task, by the way, for Bernie Sanders, AOC and others, because are they really going to stand up for communism against freedom? Or are they going to side with the people of Cuba? Same thing goes frankly, for Biden and for his press secretary who idiotically yesterday said, this really is not about freedom, a sign that she was in total denial about the nature of the world. Anyway, I just thought I’d share those ideas with you.