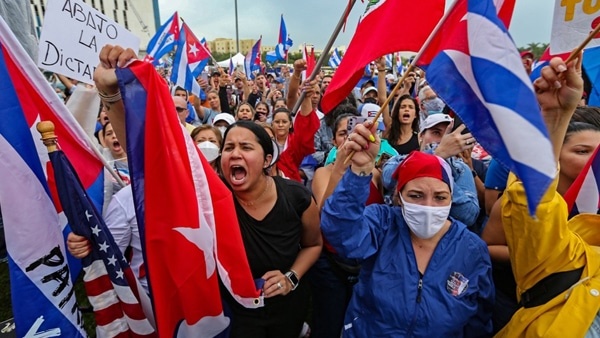 Thousands of demonstrators in more than 40 cities and towns throughout Cuba have taken to the streets to protest 62 years of oppression.  In a communist country that suppresses dissent, the recent wave of protests is the most significant grassroots stand against the dictatorship in more than three decades.

Since the end of the Cuban Revolution in 1959, the Cuban people have lived under the oppressive rule of the Castro dictatorship.  Upon Raúl Castro’s recent retirement, his handpicked successor, Miguel Díaz–Canel seized control of the Communist Party, Cuba’s only legal political party, and the presidency, in an election that was neither competitive, free, nor fair.

As the communist regime attempts to deflect blame for the state of unrest, basic goods and services are in short supply. The fact is Cuba is suffering from a severe economic crisis.  Food is scarce, the health care system is overwhelmed by the COVID-19 pandemic, and electricity outages are a regular occurrence.

It is clear that the suffering experienced by the Cuban people is the result of the corrupt, oppressive, and authoritarian communist regime.  As protestors bravely stand in the streets withstanding rubber bullets, tear gas, beatings, and the threat of arrest, shouts calling for “Freedom!” and “Homeland and life!” ring out among the crowds.

For decades, Cubans have been denied the protection of fundamental human rights and freedoms.  According to the U.S. State Department’s 2020 Human Rights Report, the Cuban people have been victims of government-sanctioned human rights abuses including unlawful killings, arbitrary arrests, forced disappearances, and torture.

In addition to these atrocities, the Cuban Communist Party systematically violates religious freedom.  On December 2, 2020, the United States designated Cuba as a Special Watch List country for its engagement in and tolerance of severe violations of religious freedom.

Approximately 60 percent of Cubans self-identify as Catholic, an estimated five percent are Protestant, and hundreds of thousands are members of other religious faiths.

The communist regime exercises direct and arbitrary control over most of the religious practices in Cuba.  According to the United States Commission on International Religious Freedom’s 2021 Report, using a system of laws, policies, surveillance, and harassment, the Cuban government controls and suppresses religious groups and supporters of religious freedom.

In 2020, there were 203 cases of documented religious freedom violations in Cuba.  Religious communities and their leaders were harassed, threatened, detained, and interrogated.  Prisoners were denied pastoral visits and were not permitted to worship or pray with other inmates. Moreover, journalists reporting on the lack of religious freedom in Cuba were threatened and harassed by the authorities.

Further, it is a criminal offense to be affiliated with any religion that has not been approved by the communist government, leaving many worshippers vulnerable to government oppression.

To communist dictatorships, freedom of religious belief, expression, or political opinion, threaten the regime’s ultimate power and control.  As state security officials who were involved in the detention of Cuban religious leaders said, “There is only one god, Fidel Castro.”

The recent demonstrations in Cuba are a result of the decades of suffering and hardship that the Cuban people have endured at the hands of the regime.  As Cubans stand up against the horrors of communism, we must support their fight for freedom.