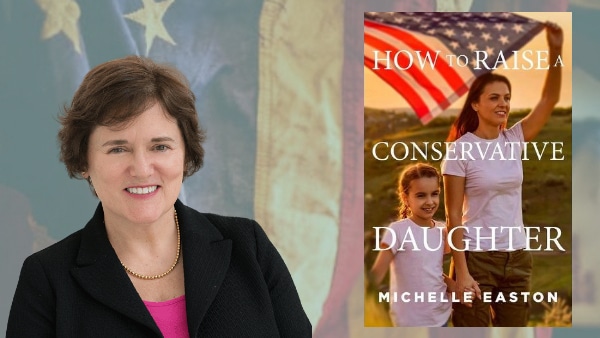 I recently had the opportunity to talk with Michelle Easton, author of How to Raise a Conservative Daughter – a newly released book written to prepare the next generation of conservative women leaders.

Parents and guardians across America make choices about how they will raise their children every day. These choices engrain values into children that they will carry throughout their lives—most importantly, when they leave home and navigate the world on their own.

I recently had the opportunity to talk with Michelle Easton, author of How to Raise a Conservative Daughter – a newly released book written to prepare the next generation of conservative women leaders.

As the Founder and President of the Clare Boothe Luce Center for Conservative Women, Ms. Easton understands the common challenges that young, conservative women face after moving away from home. She wrote How to Raise a Conservative Daughter as a guide intended for parents, guardians, and mentors to help shape the lives of future female leaders.

How to Raise a Conservative Daughter covers a variety of topics ranging from family values, the virtue of hard work, serving others, and money management. Ms. Easton’s book is grounded in the core principles of conservatism, including that “self-worth flows from God, not government,” the importance of America’s history and American exceptionalism, and that a woman’s differences are her strengths.

Ms. Easton said during our discussion that the principles of radical feminism reject the unique attributes that make women most powerful. Society says that women must be selfish to be successful, encourages delaying marriage, and views starting a family as an added burden.  Radical feminism teaches that a woman must view child-rearing as a weakness, but Ms. Easton explained that a life without love or family, is hardly the life we are called to live.  A loving, adult relationship and the expansion of that love into a family, are among the most impactful experiences in many women’s lives.

As President of the Clare Boothe Luce Center for Conservative Women, Ms. Easton works alongside politically ambitious young women that strive to bring impactful speakers to campuses and grow the conservative movement.

In our conversation, Ms. Easton recalled a transformative event in the 1970s while she was a university student. At that time, George McGovern was launching a campaign fueled by leftist policy views. Ms. Easton took to her Young Americans for Freedom chapter and began passing out flyers that challenged these radical and harmful ideas.

“I was walking down the hall one day and a sociology teacher backed me into a corner (and) started yelling at me.” With this challenge, however, Ms. Easton added, “I found my voice…I spoke up a bit and then she just walked away.” She said that what leftist bullies don’t realize is how their hate serves to ignite passion and stronger activism from the right.

Ms. Easton recalled a key phrase her father would tell her while growing up: “Get in there and fight.” She has always lived by this advice and knows that instilling conservative values in young women requires cultivating the passion, confidence, and strength within each girl to stand up for her beliefs.

Michelle Easton’s How to Raise a Conservative Daughter is certainly a book worth reading. How to Raise a Conservative Daughter calls us all to “Get in there and fight.” Whether you are a parent who is guiding your daughter, or a daughter living on her own for the first time, this book will equip the next generation of conservative leaders with the tools they need to defend their values and ensure a prosperous future for America.

You can find Michelle Easton’s How to Raise a Conservative Daughter here. Be sure to visit the Clare Boothe Luce Center for Conservative Women’s Website to learn more about getting conservative girls involved on campus and at home.