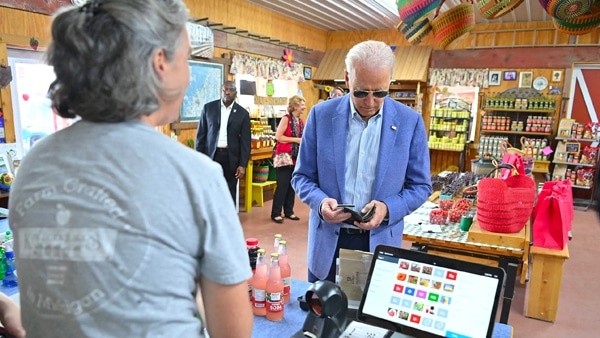 The average American is intuitively more worried about inflation than the Biden administration.

Inflation has started to rise. The 5.4 percent increase in June is a disastrous beginning to a potentially devastating cycle. The fact that the standard of living dropped 1.7 percent for the average family in June is a disaster in human terms since the working poor and middle class will lose purchasing power while the rich get richer.

The Democrats’ proposals for even more spending guarantee more inflationary pressure as former Democratic Secretary of the Treasury Larry Summers has been warning.

In fact, the Biden administration faces a bigger problem than the Carter administration did (the last high-inflation Democratic administration). When inflation grew out of control under Carter, the then-new Federal Reserve Chairman Paul Volcker dramatically raised interest rates. He forced a deep recession (which hurt Republicans in 1982 but set the stage for prosperity and a big Ronald Reagan victory in 1984).

Jerome Powell, the current federal reserve chairman, does not have the maneuvering room to raise interest rates enough to stop inflation. The current total public debt is $26.70 trillion. Annual interest at the current low (indeed artificially low) rates is vital for the federal government and for state and local governments which have also run up huge debts. A Volcker strategy of high interest rates would have a crushing effect on federal, state, and local budgets as the cost of servicing the debt would rise dramatically and eat into the rest of the budgets.

Furthermore, a Volcker-style high interest rate, recession inducing strategy coming after the last two years of economic pain would be deeply opposed by virtually every American.

The only way to avoid a disastrous level of inflation that destroys the American standard of living without creating a deep recession that puts millions out of work is to cut government spending dramatically. This is the logical corollary to Summers’ argument that high spending on top of inflation guarantees even higher inflation.

The COVID-19 pandemic has already driven government spending too high while also slowing down the economy. This guaranteed more dollars chasing fewer goods and services which is the essence of inflation – and was precisely the problem with the Carter economy back in 1979-1980.

So, the Biden-Democratic massive spending increase is pouring trillions of dollars into an economy which does not have enough goods and services to absorb the money, and we have the textbook explanation of how inflation grows.

I knew the problem was out of control when the District of Colombia’s government texted me an offer to pay the next three months of my rent – and to pay any back rent I had not been able to pay over the pandemic. Since I got this text message even though I don’t live in D.C., I assume the total number of people being offered money is unbelievable. The Biden-Democratic message is “when in doubt spend. When in doubt borrow.”

The crisis of incompetent government wasting your money while it sets the stage for inflation is captured by one simple case study. Roughly half of unemployment funds paid out during the pandemic were lost to fraud. As Axios reported, this amounts to about $400 billion of tax dollars. What do you think is going to happen with all the new money Biden and the Democrats want to print?

Finally, It is impossible to seriously cut spending in a vacuum or without a powerful moral and political case. Since everyone in the bureaucracy and Congress will move to protect their spending, programs, and projects, it is virtually impossible to get serious reductions in place.

The only way to deal with a spending mess the size of the Biden-Democratic program is to re-establish the goal of a balanced budget.

We found in the late 1990s that when Congressional Republicans insisted on balancing the budget, everyone came to understand that they were going to have to sacrifice some. The result was a collective will to find savings, pass reforms, and reach a historic goal. Without the goal of a balanced budget, we could never have achieved the savings that were needed.

When Congressional Republicans won in 1994, President Bill Clinton submitted, on Feb. 6, 1995, a budget with $200 billion deficits for the foreseeable future. We rejected it and forced him to come along in adopting the balanced budget goal.

Because we implemented a balanced budget campaign as a team, the results were astonishing. When Congressional Republicans took office in 1995, the Congressional Budget Office projected that over the next decade the cumulative federal budget deficits would total $2.7 trillion. Four years later, in January 1999, it projected that over ten years that federal surpluses would total over $2.3 trillion – a four-year turnaround of $5 trillion in the financial outlook of the United States.

Tragically, the Republican leaders failed to keep focused on controlling spending, reforming government, and balancing the federal budget. However, the 1995-1999 Congressional Republican record was remarkable. Stephen Moore looked at the results in a study for CATO Institute. Consider the facts:

In 1995 the CBO ten-year projection of federal debt as percentage of GDP was 56.1 percent. In 1999, after a four-year focus on reform, spending control, regulatory reform, job creating tax cuts, and balancing the budget, projected federal debt as a percentage of GDP was 12.2 percent (projected to decline to 8.9 percent by 2009). This was an 80 percent improvement in four years.

This is the best path forward for stemming inflation without devastating millions of American families.