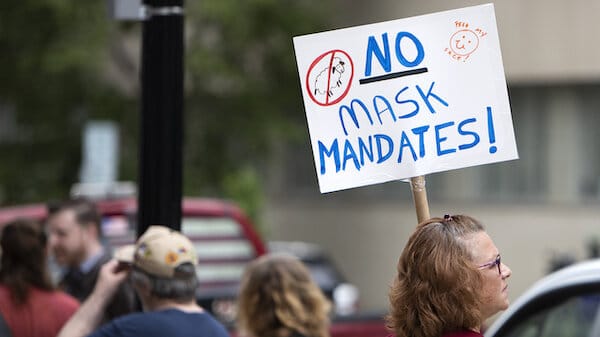 Last week, we asked readers: "Do you believe Americans have as much personal freedom today as we did before the COVID-19 pandemic?" A total of 1,417 readers responded to voice their opinions on the matter.

The overwhelming majority of respondents stated that "No, there is less personal freedom today" with 96.68 percent (1,370 readers) of the vote.

Just 1.76 percent (25 readers) felt "personal freedom has remained the same" since COVID-19 began. The remaining 1.55 percent (22 readers) said they were "not sure" about the state of freedoms now.

Despite conditions in America improving since the start of the year, many worry about the increased role of the state and federal government. Discussions of required vaccines by many colleges and businesses, as well as talk of vaccine passports, appear to be a grab for control by politicians.

Should such measures pass, a number of Americans fear what areas of their personal life could be encroached upon next. From gun control to religious freedoms, it is a valid fear that any of these freedoms could be regulated or taken away in the near future.

Do you believe Americans have as much personal freedom today as we did before the COVID-19 pandemic?