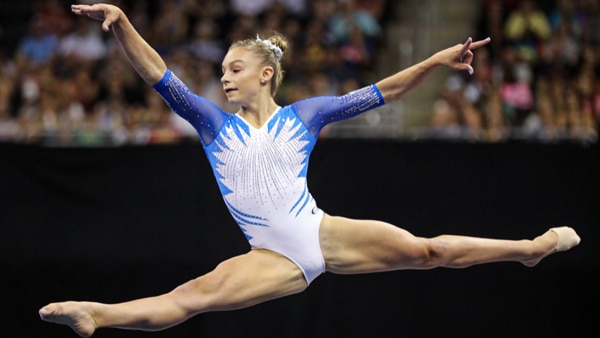 In the coming days, 18-year-old Minnesota native Grace McCallum will join Team USA as part of the U.S. women’s gymnastics team.  As a gymnast, Grace will be joined in Tokyo by teammates Simone Biles, Sunisa Lee, Jordan Chiles, Jade Carey and MyKayla Skinner.

As a member of the U.S. Olympic gymnastics team, it is clear Grace is an extraordinary athlete.  Starting her gymnastics career in 2006, Grace has earned numerous athletic accolades.  She is a two-time world team champion, a U.S. balance beam bronze medalist, and a U.S. all-around bronze medalist.

Grace’s undeniable talent, inspirational work ethic, and unwavering dedication enabled her to achieve her dream of competing in the Olympics.

But in addition to Grace’s athletic abilities and strength of character, she is an inspirational woman of tremendous faith.

Grace’s Catholic faith is central to her success in the gym.  She recognizes that God has given her a remarkable gift and says, “I have this talent that God gave me and want to do everything I can to show people what I’ve been given.”

Grace says prayer helps to keep her grounded and focused.  She travels with a rosary and a special cross that were given to her by her grandmother, which bring her peace and calm.

Not only has Grace’s faith helped her to achieve immense success, but it has also helped her overcome significant challenges as an athlete in a physically and mentally demanding sport.

Grace sustained a boxer’s fracture in her hand only six months before the Olympic trials.  The balance beam injury required surgery, a plate, and seven screws to stabilize the bones in her hand.

At the time, Grace thought the injury meant that her dream of competing in the Olympics was over.  But she continued to work hard and persevere through adversity.  She trained every day, according to her coach, and continued practicing, pushing, and patiently trusting that her efforts were not in vain.

All of Grace’s hard work and determination paid off.  Now, just a few months later, she has achieved her dream and will be competing for Team USA in Tokyo.

With courage, humility, and persistence, Grace McCallum is an incredible example of a world-class athlete.  Her steadfast faith and extraordinary dedication are an inspiration.