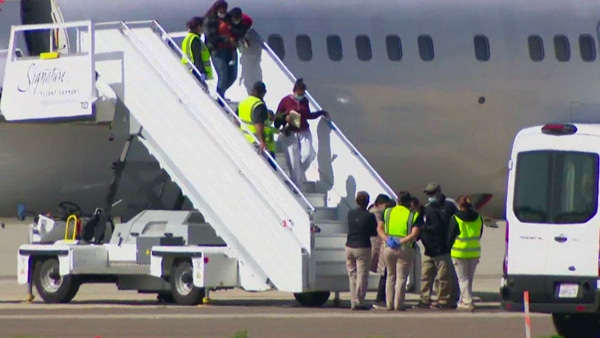 The flood of people crossing illegally is growing. The numbers are so large that it helps to visualize the Biden policy as a matter of importing entire cities.

Watching television coverage of people crossing the border illegally at our southern border I began to wonder: where are they going?

I was shocked to learn that the Biden administration refuses to tell the states and cities how many people they are sending – and who they are sending. Apparently, immigrants just get put on airplanes, buses, and trains, and go off into America.

We are learning that a substantial number of the people who have crossed the border illegally have COVID-19. McAllen, Texas had to declare a state of emergency when 7,000 infected immigrants arrived there. So, the Biden government could send people with COVID-19 to your neighborhood and then refuses to tell you that it has put you at risk.

Some of the illegal immigrants have gang connections including members of the famous MS-13 El Salvadorian gang. Keep in mind, a 2020 Department of Justice report found that 74 percent of the MS-13 defendants in custody were here illegally. Under the wide-open Biden policy, they can be sent into your town without you knowing it.

What makes the Biden policy so infuriating is its sheer scale.

In the first seven months of the Biden presidency more than 1 million people have been stopped crossing our southern border, and a substantial number of additional people have entered illegally without being noticed officially by the federal government.

The flood of people crossing illegally is growing. The recorded number (not counting those who came in avoiding all contact with the government) entering the United States has grown from 78,442 in January as Biden was being sworn in to 210,000 in July alone.

What makes this growth so sobering is that historically illegal immigration drops in the summer when crossing the desert is so hot it is deadly. President Biden’s smile is apparently overcoming the Mexican heat.

If the number of migrants keep growing, there will be more than 2 million entering the United States this year (not counting the additional ones who will enter without the government knowing it).

At a time of pandemic, rising violent crime rates, and confusion in and around our schools, it is legitimate to ask what is happening to thousands and thousands of people flooding in illegally. Americans know this is dangerous. In one poll, 90 percent indicated they want every illegal immigrant tested for COVID-19.

The Biden administration has refused to tell governors, mayors, county commissioners, school systems, or local police how many people who crossed illegally they are sending to their communities or what the immigrants’ circumstances are. How many have COVID-19, how many are gang members, or how many have violent criminal records?

The threat of COVID-19 infection is not merely rhetoric. In McAllen, Texas the federal government has buses running every 30 minutes bringing people who crossed illegally from the border and dumping them at the bus station, so they can move on to anywhere in America with no supervision.

According to the Valley Central Hidalgo County Judge Richard Cortez:

“Now we’re seeing that they’re coming in with a high infection for COVID, and there’s no room for them anymore.”

It is clear the Biden administration COVID-19 strategy is tight control of Americans and no control for people coming to the country illegally.

Since everything is secret, we really don’t know who is paying for housing, food, medical care, or schooling. In fact, as the number of people in the Biden flood passes 2 million this year, the amount being spent is going to rise dramatically.

The numbers are so large that it helps to visualize the Biden policy as a matter of importing entire cities.

Here are their first seven cities:

In January, 78,442 people came into the country illegally. This is the same size as New Rochelle, New York

For February, 101,095 people crossed, the same as the population of San Angelo, Texas.

In March, 173,265 people crossed illegally, the population of Salem, Oregon.

In April, 178,850 people illegally entered the country, or the population of Newport News, Virginia.

In May, 180,641 people came in, equaling the population of Chattanooga, Tennessee.

In June, 188,829 people entered, or the same as the population of Knoxville, Tennessee.

In July, 210,000 people came in illegally, the same number of people living in Birmingham, Alabama.

Where are all these people going?

How many of them have COVID-19?

How many of them are criminals?

The Biden approach of controlling Americans with masks, vaccinations, COVID-19 passports, and lockdowns, while allowing more than 1 million people this year enter America illegally – and then wander the land anonymously – is an unsustainable policy.

Every senator; congressman; governor; state legislator; and city, county and school board official should be demanding detailed information about any person who entered the country illegally being sent into their communities.

Until we find out where the Biden flood is going, we are all at risk.