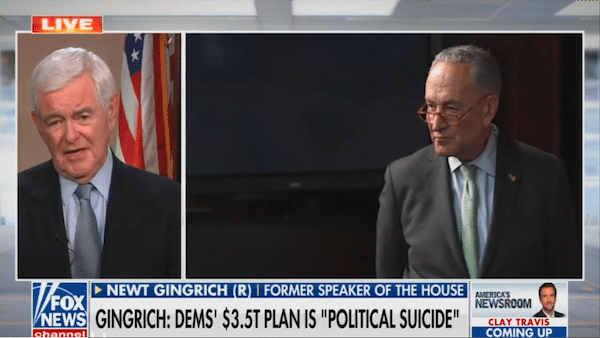 Newt gives his thoughts on the looming economic disaster coming under the Democratic party and how out of touch Washington D.C. is with the American people.

Let me just start with the story you just had. As Dr. Fauci points out we have hundreds of millions of cases now where people have been vaccinated. I’ve been vaccinated, Callista has been vaccinated and the Food and Drug Administration still hasn’t approved it? How stupid does the FDA bureaucracy have to be to have this huge worldwide proof that it’s safe and yet clearly some people are not getting vaccinated because they are waiting for the government. And that’s typical of what we’re seeing. In California, $32 billion was stolen from the unemployment fund. In Washington state, $900 million was stolen from the unemployment fund. The notion that an unreformed bureaucratic system that’s incompetent is ridden with corruption and is incapable of functioning is now going to get 3 1/2 trillion dollars tells you that ideology is defeating reality. We need to reform the federal government more than we need to pay more for it. We need to reform the Pentagon more than we need to pay more for it. And yet the rush is always you can write a bigger check. Why? Because you are writing it on your grandchildren. All this money is phony. None of it is covered by taxes. Even the infrastructure bill was very disappointing to see the Republican senators basically cave on whether or not the bill would be fully paid for. It’s apparently $250 billion unpaid for. They still voted yes. And I think Washington is totally out of touch with the real world.

Well, you have Democratic Secretary of the Treasury Larry Summers who has a Ph.D in economics and was President of Harvard. He said publicly to his fellow Democrats, this is crazy. You are going to create so much inflation, you are reinventing the Jimmy Carter economy except it will be worse. I think people — you had 3 1/2 trillion on top of a 200 trillion, billion on top of a to 1.2 trillion on top. You’re flooding the system with paper. You’re not flooding it with new goods and services. You send out so much cash that there are millions of people who aren’t going to go to work because the government is taking care of them. This is an invitation to an economic disaster and the people who are going to catch the blame are called Democrats because they are doing it. So, I think 2022 and 2024 could become a total disaster for a democratic party that combines socialism and radicalism and inflation all in one package, which will be I think pretty hard to sell.

Look, I hope AOC can balance her personal checkbook better than she can balance the federal checkbook. Because the truth is she is part of the group leading us to an economic disaster of inflation with high unemployment, high inflation and a bureaucracy that doesn’t work.