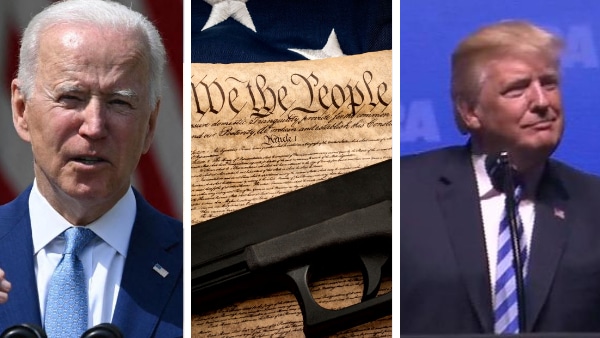 President Trump warned us that Biden would attack our freedom. Our rights are in danger; Americans must always stand up to oppressive legislation.

The Second Amendment is a right guaranteed to all Americans. The ability to keep and bear arms is under attack by the Biden administration’s harmful policies and legislation.

Since the kick-off of his campaign in spring 2019, Joe Biden has made it his chief priority to strip Americans of their right to defend themselves. In an executive order this spring, President Joe Biden ordered the Justice Department to make a ruling on the use of pistol stabilizing braces. Pistol braces are often used by American veterans and individuals with physical disabilities. Biden’s executive order criminalizes law-abiding Americans who are trying to use their weapons safely. This ruling would reclassify many pistols and handguns as short-barreled rifles, requiring a license. Biden’s attack on guns is wrongfully punishing law-abiding gun owners, making every day Americans feel like criminals.

Another Biden executive order called for the Department of Justice to issue rules that encouraged states to identify and eliminate loopholes on so-called ghost guns. Ghost guns are self-assembled guns that use hybrid materials different from traditional firearms. Since ghost guns are not technically firearms, they are often sold without serial numbers. President Biden’s executive order urges the DOJ to create guidelines for the states that encourages ghost gun registration and permits. Biden’s executive order ignores the fact that many states already have anti-ghost gun laws in place (including California, since 2018). Despite the somewhat limited reach of this executive order, Biden and his team have celebrated this action – though ghost guns are only connected to a small percentage of violent crimes.

Biden’s sweeping executive orders on pistol braces and ghost guns ignores the fact that most gun-related deaths result from the use of illegally-owned handguns or suicides.

Every person should have the ability to protect his or her family and property. Democrat-led legislation has created a 10-day waiting period on individuals purchasing a gun. Ten days is a long time to wait to protect your family. Why should Americans have to wait to exercise their rights?

President Trump warned us that Biden would attack our freedom. In 2018, Trump told crowds that Biden’s America would mean “No guns, no religion, no energy, no oil.” He told us “The coming years will decide the survival of our Second Amendment.” After six months with a new administration, that statement is more powerful than ever. Our rights are in danger; Americans must always stand up to oppressive legislation.

President Trump was a defender of our Second Amendment rights by reversing the harmful policies put in place by the Obama administration. He fought back against those same 10-day wait periods and threatened to defeat legislation promoting universal background checks. President Trump even fought to keep gun stores and ranges open for Americans during the COVID-19 pandemic.

Today, our right to bear arms is more vulnerable than ever. We must not let the administration and liberal media criminalize legal gun ownership and treat responsible gun owners like criminals. It is our privilege as Americans to protect ourselves and our families.