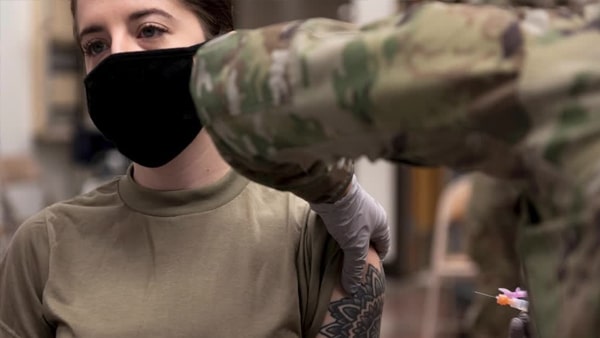 The military mandating vaccines against COVID-19 has impacted Anna Paulina. She believes the vaccines should be optional instead of mandatory. Military members must have the choice.

So actually, as a military spouse and someone that still has a very much so connection to the military community, not just as a veteran, but someone who still has friends that are in, I can tell you that the debate in regards to COVID-19 and the mandatory vaccine has been something that has been concerning a lot of people, right? So we know that the military, and I can tell you that I remember going through basic training and it was like literally an assembly line of shots where you would

Get there. I didn’t even know what they were injecting me with. Honestly, I just remember going through basic training and literally

Having people just stick me with needles. And then that was it. I had, I was up to date on my vaccine records. And then later on, you obviously had to take the mandatory flu shot every year, but there are certain vaccines in the military that are not required. So another one, a lot of people might not know. And obviously this does not apply to you guys. And this is for women for the ladies specifically, but Gardasil, which is the HPV vaccine. That’s actually something that you can choose. It’s an elective vaccine in the military, so it’s not required. But I think that it’s really interesting that COVID-19 went from being something that people could choose very similar to Gardasil, to something that now they’re requiring. And I think that it’s making a lot of people feel uncomfortable, obviously being in the military, you have to make sure that you are in tip top fighting shape and condition.

But I think that there’s a very big difference between something that’s, you know, been fast-tracked, it might not necessarily have the, all this study and research behind it versus something that’s been on the market for a very long time. And I think that it should be left up to military members to decide. And I know cause I’ve received tons and tons of messages from people on my various social media platforms, whether it is on Facebook or Instagram or Twitter that are simply uncomfortable with it. And they’re uncomfortable because of the level that it’s been fast-tracked. And so I think that again, um, you know, you have this debate on, should people be forced to take it while there’s therapeutics available. And I think, and I still do reserve the right to say that I think that people should have the right to medical freedom and choose what they put into their bodies.

Now I know again, in the military, it’s a different game because of the fact that, you know, you are service members and essentially the military can tell you what to do, but do I think that it’s right, that they’re forcing it? No, I think that there should be like the Gardasil shot. I think that it should be elective. I think that also too, there’s a lot of chatter at the fact that you have military members, uh, or not, excuse me, not military members, but that you have a lot of chatter about there being now a need for a second and a third booster shot for this because of the different variants. And I think that this is ultimately gonna end up like the flu shot, where it’s basically every single year, they’re going to ask people to get a different one in order to actually combat this. So again guys, I mean, it, we live in an era now where obviously we’re able to have disagreeing in differing opinions, but ultimately I think that many military members are uncomfortable with this. And I know because I’ve heard it. I know because I’ve read it and people have told me about it. And I ultimately think that it should be up to those military members to decide not the DOD as a whole.