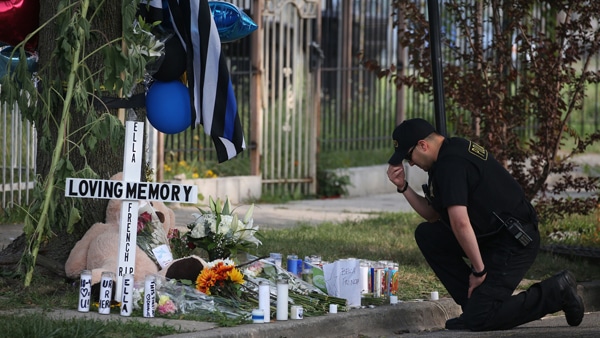 Violence rages on the streets of Chicago. Anna Paulina discusses how the leftist Mayor Lori Lightfoot is not doing enough to combat crime in the city. She expresses her frustration over how Officer Ella French, a 29-year-old woman, was killed in cold blood while congressional Democrats seek to cut police funding.

Everywhere over the last couple of days on social media, you really could not open up your app without seeing this beautiful young woman by the name of Ella French. She was actually gunned down. She was 29 years old and she was shot during a traffic stop and armed confrontation in Chicago only to later on, find out that it wasn’t just her, that there was obviously other officers injured as well. And that the impact that this had not just, I think, on the police community in Chicago, but I think the entire nation just mourn the loss of this amazing young woman. And you really see the impact that this whole defunding the police. And I think this anger and rage culture that’s developed in regards to lashing out to the law enforcement community because of these leftist organizations like Black Lives Matter. And this leftist mentality from Mayor Lori Lightfoot, who’s been doing nothing for the city of Chicago, mind you, you really see the impact that this had.

And I think that it’s time for society as a whole for people to actually say, no, we’re not going to agree with this anymore. We don’t tolerate this. We don’t think that law enforcement is the boogeyman. And I think that it’s really sad because this young woman, Ella French, who was gunned down this young beautiful and incredible woman, was someone that felt that she was helping her community. And the ironic thing was is that the area that this happened and was used to be an area that Barack Obama actually represented when he was in the state house there. And it’s very interesting to see really how far, um, and really how, how horrible the community that he represented has become and how horrible these movements. These leftist organizations have really, I think, impacted the local community because you see, it’s never, it’s never the wealthy that is impacted by defunding the police, right?

We know that a lot of these people that are advocating for this, a lot of these leftists are actually spending a ton of money, like representative Cory Bush, on private security. It’s always the lower income communities. It’s always majority time, the lower inner city minority communities that are suffering because of the defunding, the police movement. I mean, who are they supposed to call? They can’t call their private security. Who are they going to call? They’re going to call 9 1 1, which is essentially funded by the city. And if they can’t get those people there, if they can’t, you know, what are they supposed to do a lot of times too, mind you in Chicago, they have some of the strictest gun rules in the country. So, it’s not like these people can have a concealed carry. I mean, for God’s sakes, they’re a gun-free zone for the most part. And look, what’s happening in the city of Chicago. So really, really tragic, tragic. It’s honestly just, I think it’s a reflection in society where we’ve gone, that you have so many people that think that law enforcement are the enemy, and they’re not, you have so many people that really have, I mean, just stigmatize and demonized law enforcement. And it’s really unfortunate because young women, like this end up getting killed in the process.