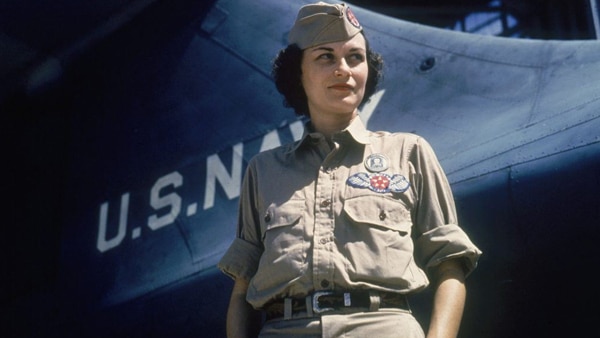 On August 14, 1945, President Harry Truman announced the surrender of Japanese forces to the Allies.  This announcement, nearly four years after the surprise attack on Pearl Harbor, marked the beginning of the end of World War II and was followed by celebrations around the world.

The Allied victory during World War II was made possible by millions of brave American women and men who answered the call to defend freedom, human rights, and religious liberty.

On the home front, as men enlisted in military service, American women entered the workforce and took on essential jobs that were previously unavailable to them.  The share of women in the workforce increased from 27 percent in 1940 to nearly 37 percent by 1945.

Women’s efforts on the home front ensured that America was equipped with the armament needed to defeat the Axis powers.  Before World War II, only 1 percent of workers in the aircraft industry were women. By 1943, however, women comprised 65 percent of the aircraft industry’s workforce, totaling more than 310,000 women.  Further, the iconic “Rosie the Riveter” campaign fostered the recruitment of women to the munitions industry and ultimately became the most iconic symbol of women in the workforce throughout World War II.

In addition to serving in the workforce, about 350,000 American women served in the Armed Forces during World War II.  This was the first time in U.S. history that every American military branch included women within their ranks.

Additionally, a total of 88 women were taken as prisoners of war, including Army Colonel Ruby Bradley.  While Colonel Bradley was held for 37 months as a POW at a camp in the Philippines, she used her training as a nurse to perform 230 major surgeries and deliver 13 babies, despite brutal conditions.

It was also during World War II that women flew U.S. military aircraft for the first time, as more than 1,000 women joined the Women’s Airforce Service Pilots (WASP).

Jacqueline “Jackie” Cochran, the most accomplished female aviator in the U.S. at the time (and a close friend of Amelia Earhart), became the director of WASP.  As part of the program, women were trained to pilot military aircraft so that male pilots would be free to fly in combat.

WASPs ferried heavy aircraft, such as B-26 and B-29 bombers, to factories and military bases, transported cargo, towed targets for shooting practice, and tested aircraft.  By the time the program was cancelled by Congress in December 1944, WASP pilots had logged more than 60 million miles of flight, enabling thousands of U.S. male pilots to deploy for active duty.

Women who were a part of the WASP program during WWII were considered civil service employees and did not receive military honors or benefits.  Records of the program were classified and official traces of the pilots’ efforts effectively disappeared.

In 1977, WASPs were formally recognized as veterans of the U.S. military — more than three decades after the end of WWII. It would take an additional three decades for these brave American aviators to receive one of the highest civilian honors, the Congressional Gold Medal, during a ceremony at the Capitol on March 10, 2010.

American women in the armed forces and the workforce during World War II paved the way for future generations of women to serve our nation using their unique gifts and talents.  On this historic anniversary, the many contributions of these trailblazing women are to be remembered, celebrated, and honored.