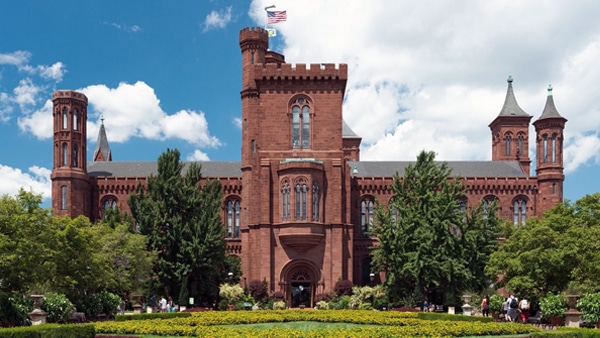 Capitol Hill is usually quiet in August, as most members of Congress travel to their home states and districts. However, the National Mall is typically filled with people from all over the globe who come to appreciate the largest collection of museums, archives, and gardens in the world – the Smithsonian Institution.

This year is no exception. By the end of this month, all but one of the Smithsonian’s 19 sites will be reopened after closing during the height of the COVID-19 pandemic (including the Cooper Hewitt Smithsonian Design Museum and the Museum of the American Indian in New York City). The final site, the Arts and Industries Building in Washington D.C. will reopen in November for the first time since 2004.

The re-openings come at a fortunate time, as this August marks the 175th anniversary of the Smithsonian Institution.  On August 10, 1846, the U.S. Senate passed legislation founding the Smithsonian and President James K. Polk signed the legislation into law.

But the Smithsonian Institution’s remarkable story began nearly two decades earlier, when a wealthy Englishman and scientist named James Smithson died and ultimately left his estate to the United States – a country to which he had never been – specifically to create a museum “at Washington, under the name of the Smithsonian Institution, an establishment for the increase and diffusion of knowledge.”

Smithson’s wealth first went to a nephew. When the nephew passed away with no heirs in 1835, the wealth was bequeathed to the U.S. Congress. The estate consisted of more than 100,000 gold sovereigns, which at the time was valued at $500,000. It was no small gift. In today’s dollars, Smithson’s estate would have amounted to $14.7 billion. (And more than $40 billion had the coins been exchanged at today’s gold prices).

No one is certain why Smithson decided to deed his wealth to the U.S. government so it could build museums on American soil. And it may seem surprising, but the founding of the institution was hotly debated in Congress. Just as representatives and senators debate furiously today, members of Congress argued for a decade over the meaning of “the increase and diffusion of knowledge.”

Eventually, the Congress and President Polk agreed that a collection of museums, galleries, archives, and gardens would best serve Smithson’s final wishes – and the American people.

As COVID-19 restrictions lift, we hope you will make the trip to Washington D.C. to learn from and support the Smithsonian Institution. It is one of the greatest gifts America has ever received.