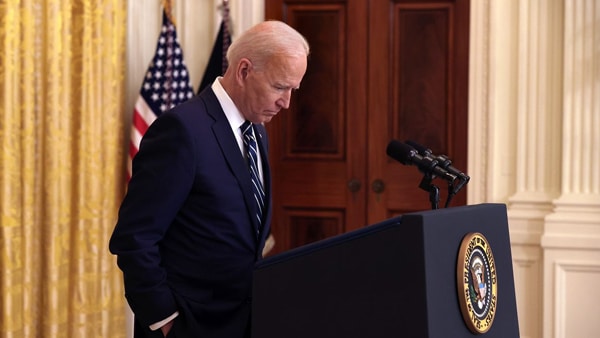 Unfortunately, President Biden’s failure in Afghanistan is just the latest in a series of failures that weakened America and strengthened hostile nations.

Watching President Joe Biden’s bizarre speech yesterday, I felt he was living in a different universe. Apparently, Biden had been kept at Camp David with no television and simply repeated the calm, dishonest-but-reasonable sounding speech his staff had drafted.

The gap between the television scenes of thousands of panic-stricken Afghans desperate to leave their country and Biden’s calm, almost subdued speech was enormous. He stoically defended his decision to surrender and blamed everyone except for his own administration for the disastrously chaotic, dangerous U.S. exit from the country. Meanwhile, the rest of the world witnessed a clearly massive failure of leadership in which the American government turned its back on a 20-year ally. I do not believe Biden could have delivered such a calm, abstract speech if he knew what was going on in the real world.

How could Biden say, “I have been clear that human rights must be the center of our foreign policy, not the periphery,” as the Taliban begins to oppress every woman and girl in the country and institute a policy of seizing women and girls to force them to marry Taliban fighters? Does Biden truly not understand that the Taliban victory is a massive victory against women by a medieval movement rooted in the ideas of the 7th century?

How could Biden smear the courageous Afghans who had risked their lives for decades fighting against the Taliban and allying with the United States? Biden said, “the Afghan military collapsed, sometimes without trying to fight.” He continued: “American troops cannot and should not be fighting in a war and dying in a war that Afghan forces are not willing to fight for themselves… We gave them every chance to determine their own future. What we could not provide them was the will to fight for that future.”

This is among the most cowardly lies any American president has said about an ally. While some 2,448 Americans have been killed in the 20-year war, the Afghan military has lost nearly 30 times as many (an estimated 69,000). This by no means diminishes the sacrifice and bravery of American troops – but it refutes Biden’s callous denigration of our Afghan allies. Further, to suggest that the interpreters, guides, and informants who risked their lives – and their family’s lives – helping American troops were unwilling to sacrifice for their own future is a vicious lie told by a failing leader who is trying to mask his own incompetence.

Contrast Biden’s words yesterday with his words in July, when he told reporters a Taliban takeover of Afghanistan was not inevitable. At that time, he said, “the Afghan troops have 300,000 well-equipped — as well-equipped as any army in the world — and an air force against something like 75,000 Taliban. It is not inevitable… Do I trust the Taliban? No. But I trust the capacity of the Afghan military, who is better trained, better equipped, and more re- — more competent in terms of conducting war.”

See how quickly Biden turns his back on allies when he’s trying to save face? Can you also see how dangerous this is for America? With the world watching the Biden decision to chaotically cut and run on an ally, why should Taiwan, the Europeans, South Korea, or any other ally trust and rely on President Biden? There is a reason former Secretary of Defense Robert Gates (who served under Presidents George W. Bush and Barack Obama) said Biden has been “wrong on nearly every major foreign policy and national security issue over the past four decades.” When the world gets tough, Biden hides from reality.

And to be perfectly clear: This is dangerous for our allies, our troops abroad – and Americans at home.

With a historically porous southern border, President Biden is presiding over the recreation of a worldwide wave of terrorist enthusiasm – and the rebuilding of a terrorist sanctuary in Afghanistan. If there was ever a time for implementing serious, robust border security, it is now.

Unfortunately, President Biden’s failure in Afghanistan is just the latest in a series of failures that weakened America and strengthened hostile nations.

Killing the Keystone XL pipeline and attacking American energy production while approving the Russian pipeline to our allies in Western Europe hurt America. The United States is (once again) in the position of having to beg Saudi Arabia, Iran, the United Arab Emirates, Qatar, and others to produce more oil and gas to bring down the Biden-created spike in energy prices.

Dividing and demoralizing the American military with internal, ideological witch hunts and special courses on woke radical social values is enabling the Chinese and Russians to keep their militaries focused on learning how to defeat us.

Responding to the continuing and enormous Chinese military buildup (including two new intercontinental ballistic missile fields) with an American defense budget that has no increase – even while the U.S. Navy is shrinking to its weakest position since before World War I – is hurting America.

So, Biden’s Afghanistan failure is unfortunately only his most recent.