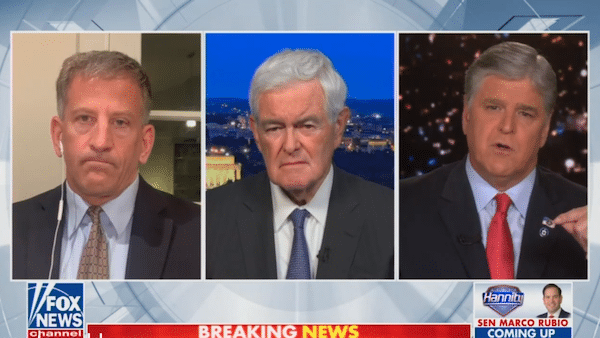 Newt talks about the consequences of the American defeat in Afghanistan and what Taliban rule means for the rest of the world’s powers.

First of all, I don’t know that Joe Biden has threatened anybody with anything. There is no way of knowing. The Biden worldview seems to be to attack your allies, ignore your enemies, pretend that bad things aren’t happening. I mean I watched this speech this afternoon and for most people if you took what you were seeing live coming out of Afghanistan of the crowds and the fear, the takeover by the Taliban and then you looked at the speech by this guy who was clearly totally out of it, has no idea what’s going on and his number one goal in that speech was to blame anyone else, he said the buck stops here. He didn’t mean that. The buck stopped with the Afghan army, the buck stopped with Donald Trump, but the fact is this is a major American defeat that is going to have huge consequences as you pointed out earlier, it’s going to embolden the Chinese whether it’s in Taiwan with the south China Sea or frankly they’re going to become allies of the Taliban. Because they want the minerals in which northern Afghanistan is enormously rich and they will be quite happy. They don’t care what the Taliban does to women. They just want the minerals.

It’s very disturbing that apparently the administration yesterday wouldn’t be automatically given any kind of priority which is the opposite of the policy we’ve always had up until now. I think there’s a deeper thing here. The Taliban has been around for a long time. They have a set of goals; they are a religious fanatic group. What’s going to happen to women? President George W. Bush was exactly right today, the greatest thing he fears is what’s going to happen to young girls and to women. And as you may remember when Callista was Ambassador to the Vatican she hosted a conference on religious liberty and had a young woman from Iraq who had been captured by ISIS and had basically been passed around as a slave. That’s the kind of stuff they see in Afghanistan and it’s sad that not a single women’s group on the left is up in arms over what’s about to happen.