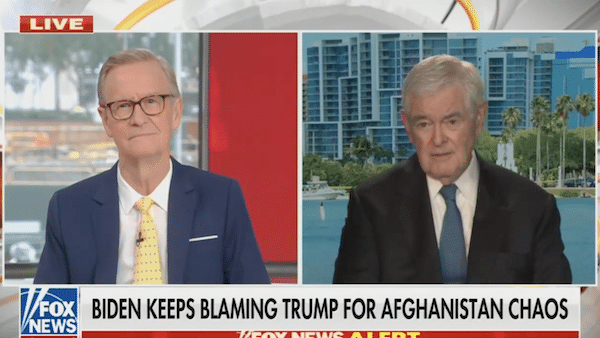 Newt discusses the Biden administration’s continuing blunders in Afghanistan, as well as the big picture regarding the damage it has done.

You know, the tragedy of all this is he’s still going to be president for more than three more years. Nobody in the world is going to trust him. The Europeans are watching him abandon them, and remember, they have I think 100,000 Europeans, in Afghanistan and the Afghans who fought on our side are watching him abandon them, he has surrendered to the Taliban. The Chinese are openly saying this means that Taiwan will now be gone because nobody is going to trust Biden to protect Taiwan. The damage he has done, and I don’t know whether it’s ignorance or arrogance, but I do know that the secretary of defense and the chairman of joint chief should both resign. They accepted a plan that was militarily impossible. You cannot give up Bagram airfield and think you’re going to keep the embassy, this is insanity, and the president gets elected by the American people so if he wants to do something totally crazy that’s a problem for congress to deal with but we don’t have to tolerate a secretary of defense and chairman of the joint chiefs who accept and implement, they should both resign, they accepted and implemented a plan which was militarily impossible, surrender to the Taliban, keep the embassy, give up your only combat center in the country and think it’s going to work somehow I’m appalled, I’m frankly more appalled with the secretary of defense and the chairman of the joint chiefs. I expected Biden to range between senility and arrogance in the way he operates but you don’t have to accept that out of your senior appointees.

Look, Ronald Regan used to say the problem with liberals wasn’t what they didn’t know. It’s what they knew that wasn’t true, and I think that’s what you’re seeing here. I think President Biden has in his own brain blocked out any information which would challenge what he decided. Look, he’s got a bad problem. He made the decision to surrender to the Taliban. That decision is not working very well. He can’t walk it back. I mean, he can’t announce tomorrow morning that we’re going to send 40,000 troops, recapture Kabul and begin to destroy the Taliban, so he’s got I think in his mind, he’s going to live through this horrible tragedy. We’ll come out the other end, and he’ll get to go back and talk about COVID and paying off the teacher’s union, and things like passing a $3.5 trillion socialist big government bill. I mean, the things he likes to do, and I think he’s just trying to endure and get beyond this, and of course, the price of that endurance is thousands of people, tens of thousands of people who are being trapped in a country where you have a basically terrorist organization, now running the government.