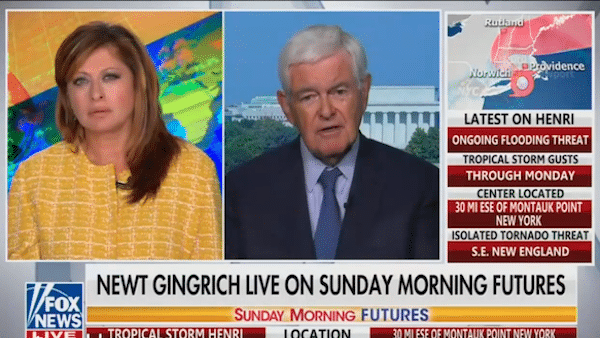 I think the big thing to realize is that this is just the opening of what will be a nightmare. You have Beijing, the Chinese communist government, saying, you know, it makes Taiwan looks pretty delectable because nobody believes Biden will fight for Taiwan. You have Iran with a very radical brand-new president, saying we might get to be more aggressive with Israel, more aggressive to Saudi Arabia. You have the southern border, which is basically collapsed, and we have people coming in with COVID, people coming in with criminal records. No controls of any kind. Of course, you’re now going to have a stream of terrorists coming out of Afghanistan knowing that if they can get to the southern border, they can get in the U.S. easily, so I think you have a heightened threat there. You go through item after item and Biden is about to have sort of a crisis of crises, so many different things going wrong and why would anybody believe him? I also think it’s going to make it harder for them on capitol hill. I think the Democrats have got to be as they watch all of this unfold, they’ve got to be in a state of shock that they have a president who is this weak, this confused and this wrong and this angry anybody who tells him contradictory things. I think we are facing three very, very dangerous years of a Biden presidency. It’s a world where there are predators. That’s people don’t get. There are countries like Russia and Ukraine, China and Taiwan and the South China Sea. There are people out there who really want to hurt us. And we now have a president sending a signal that you might as well beat up on the U.S. because their president won’t do anything to defend them.

I think that’s right. You have a seventh century deeply committed sharia-based group who really do believe in an alternative world. This been one of the things frankly even back with George W. Bush we would never win the argument inside the American leadership. These are not people you can negotiate with. Their vision of the world is fundamentally different than ours and you either have to defeat them or after 20 years they defeated us.

Well, look, I think the Democratic party, they have an remarkable talent, where they gather together no matter what they know that there are wolves out there and no matter how bad their leader is they stick with him and there is very very deep pressure not to break and not to say what you really think and in the case of Harris, you know, the vice president’s job is to stand near the president and smile and be supportive. Why they happen to send her to Saigon or Vietnam at this time is a little strange, but I don’t think they thought that Afghanistan was going to collapse this fast, so they didn’t think about the optics of the two places. She’s on the way back from Asia. Newsom, the governor of California is in deep trouble. She’s he’s very close ally. This is going to be an election where they go all out to steal the referendum. Secretary of state of California has now said you can print your own ballots. I didn’t even think about this. You talk about the opposite of election integrity, are they going to allow you to print your own ballots they are going to allow people to come around and harvest your ballot so the unions will be out there, and they’ll make sure that everybody votes even if they don’t vote, and I think this may well be the most rigged statewide election we’ve seen probably at least half century. I think people should look carefully because if Newsom is in straight honest count, he probably has a good chance of losing but if they can stuff every ballot box in California and they can cheat in every way possible, she’s part of raising the money to pay for the cheating. It’s just that simple. It’s not complicated.