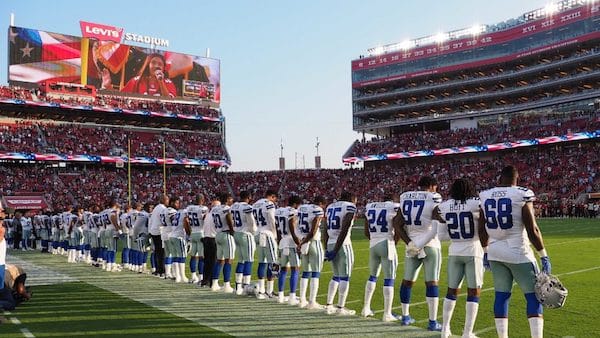 Last week, we asked readers: "How do you feel about the NFL using a second national anthem?" This follows the league's announcement that "Lift Every Voice" (known as the Black National Anthem) will be played before games during the first week of play. A total of 3,436 voters contributed their thoughts.

The overwhelming majority of participants stated "They should only play our National Anthem as that represents all of America" with 95.49 percent of the vote (3,281 readers).

Just 2.91 percent said that they were "okay with it so long as it is played AFTER the National Anthem" (100 readers). Finally, 1.60 percent believe that "They shouldn't play either anthem" (55 readers).

The NFL has yet to announce if both anthems will play beyond week one, but many have criticized the choice as shown by these results. A number of NFL players, as well as athletes in other sports, consistently protested during the National Anthem this past season.

It will be interesting to see if players continue to do so this season and whether or not television ratings will take a hit due to these anti-American actions.

How do you feel about the NFL using a second national anthem?